Gorehowl is the legendary two-handed axe of the Hellscream family of orcs. The weapon was famously wielded by Grommash Hellscream, chieftain of the Warsong clan, and was later also held by his son and heir—Garrosh, Warchief of the Horde—until he discarded it in favor of an Old God replica.

[Gorehowl] is also a drop from Prince Malchezaar in Karazhan.

Gorehowl was forged three generations before Grommash inherited it. Grommash's great-grandfather used Gorehowl to kill six legendary gronn. Their hearts were sealed into the blade, granting it untold strength.[1]

When Golmash Hellscream, the father of Grommash, was locked in the jaws of a giant gronn, he found the strength to stab Gorehowl into the gronn's eye and kill it alongside him. When they fell, it was the gronn who died first.[2] 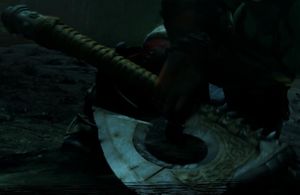 Gorehowl in the Warcraft III cinematic. 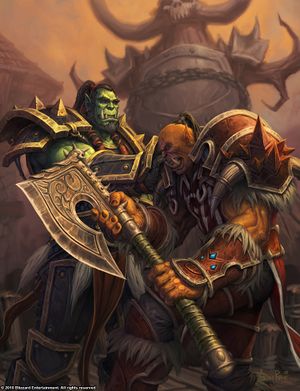 As a member of the Old Horde on Draenor, Grom Hellscream took part in the destruction of Shattrath City, Gorehowl in hand. Attacking Vindicator Nobundo, the axe would have cleaved the paladin's torso in two if the draenei had not leaned back. Already sickened by the red mist, Nobundo was able to crush the fingers of Hellscream's right hand with his Light-blessed crystalline hammer. This compromised the orc's grip with Gorehowl and prevented Hellscream from attacking him further with the axe.[3]

Hellscream had been the first to partake of the Blood of Mannoroth, eventually coming to regret it. When Thrall met him, it was clear to him that Grom had the means by which to liberate his lethargic brothers and sisters. After Hellscream again drank the Blood of Mannoroth in Kalimdor, in his hands, Gorehowl was the weapon which slew the demigod Cenarius.

During the second coming of the Burning Legion, Hellscream took his axe to the pit lord Mannoroth after Thrall was beaten into unconsciousness. With a single blow, Hellscream cleaved his adversary's weapon in two and slew Mannoroth. Hellscream perished shortly afterward, but he had managed to break the curse over his people, freeing their souls and spirits from the demonic curse forever. It seems that afterward, Gorehowl was retrieved by Thrall or the orcs of the Horde in general and kept in Orgrimmar.

Before the Shattering, Thrall himself gives Gorehowl to Garrosh, who wields it in the duel resulting in the death of Cairne Bloodhoof.[4] Garrosh wielded the legendary weapon wherever he went.[5]

When Garrosh foolishly decided to go against the advice of Baine Bloodhoof and Hamuul Runetotem and let the tauren solve their quillboar problem, Garrosh barreled forward and assaulted Brambleblade Ravine with fifteen Kor'kron Guards. The sole survivor, he nearly lost Gorehowl and his life, were it not for the intervention of Baine, Hamuul, and a handful of Sunwalkers. 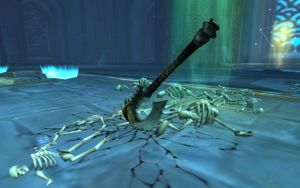 Gorehowl, left discarded in the Vault of Y'Shaarj.

Garrosh left Gorehowl behind in the Vault of Y'Shaarj. It was discovered by Jaina Proudmoore and Lor'themar Theron, although it's unknown what happened to it later.

In the alternate timeline, Grommash used Gorehowl to kill Mannoroth after rejecting the demon's blood. Some time later, he appears to have given his Gorehowl to Garrosh; Grom was not seen wielding the axe in any of his subsequent appearances in Draenor, while Garrosh used it at Grommashar. Following Garrosh's death in his mak'gora with Thrall at the Stones of Prophecy, Gorehowl remained near his corpse where Thrall had deflected it.

Gul'dan retrieved Gorehowl and brought it to Grommash in another failed attempt to convince him to drink demon blood.

Gorehowl drops from Prince Malchezaar in Karazhan. This is presumed to be a non-canon drop, as it turned out Thrall kept it following Grommash's demise and ultimately passed it down to Garrosh.

Gorehowl is a famous weapon. The sharply curved axe head, with an intricate series of grooves in it,[6] is massive, well worn, and permanently stained with old blood. Its wickedly curved blade has two notches in it, and many small holes in the head near the handle.[7] When swung, the notches causes the axe to "sing" its own battle cry, just as Grom once did, which gave the weapon its name.[8] The skull on the blade is believed to be that of a slain goren.[1] The leather wrap on the handle would have been made from clefthoof hides.[1] When it wasn't held in Garrosh's hands, he hooked it onto a brace on his back.[9]

Grom Hellscream’s axe has a heavy blade that is notched and stained, with sharp, wicked curves. Small holes dot the blade near the handle; when the wielder swings the axe, air whistles through these holes. The sound keens over the battlefield, magically strengthened and imbued with otherworldly power. Gorehowl is one of Azeroth's most feared and notorious weapons.[10] 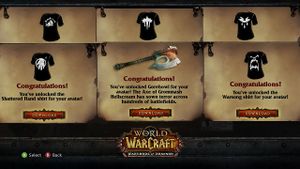 Gorehowl in an advertisement for Warlords of Draenor on the Xbox 360.

It has been speculated that Prince Malchezaar may have gotten his Gorehowl from an alternate timeline, considering his quote during the encounter: "All realities, all dimensions are open to me!"

Elaynea Welton the Wind and Sea‎ had a weapon with Gorehowl's model. If it is not a mistake, it could be Gorehowl that Garrosh had dropped in Pandaria. After Elaynea died in Tanaan, Garrosh may have retrieved the weapon and used it in Grommashar. Grommash's Gorehowl may have thus still be in the warchief's possession which would explain why he was seen with Gorehowl in Highmaul.

In the Highmaul raid, Grommash briefly appears with Gorehowl. It was thought that he might have retrieved it from the Stones of Prophecy. Since the legendary questline proved this wrong, Gorehowl being in Highmaul was probably an oversight and error.