The goren are strange creatures found on Draenor that appear to bond with certain elements. Goren are related to the Breakers and eat rocks, ore, and even elementals. They are relentless and voracious and can overwhelm those not prepared.[1] 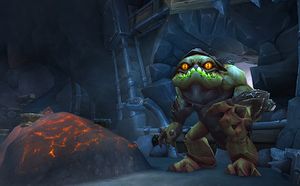 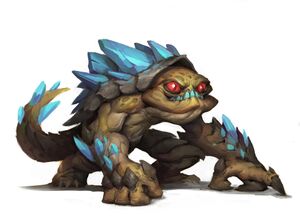 Concept art of a crystalline goren.

While the gronn and magnaron shape the world through their brute individual strength, the goren are scavenging opportunists who dart unseen between the lumbering feet of their larger cousins. Roughly the size of an Azerothian trogg, goren live in massive colonies that burrow through the earth, gobbling up minerals and leaving twisting caves in their wake. They enjoy devouring crystalline minerals, which are digested and extruded through their skin, giving some goren the benefit of an armored crystalline shell. The bane of both orc and draenei miners, goren sniff out and infest mineral-rich burrows. Adventurers should be wary of the gorens’ ability to shoot crystalline projectiles and swarm around unprepared explorers in rolling packs, as well as their impossibly sharp teeth and acidic spit.[2]

While the majority of goren are smaller than gnomes, some types grow far larger, towering over even the tauren. Rare individuals have been known to grow to monstrous proportions. This is significantly determined by the dietary success of the individual goren - given sufficient sustenance a goren can grow far beyond the normal size for their species.[3] The largest known goren is Oregorger, whose gluttony has led his frame to swell far beyond the size of any other.[3] It is possible goren simply continue to grow throughout their lives without limit, at least as long as they have enough food to satisfy their ravenous appetites. It should be noted that goren (not unlike sprites and virmen) have no love for raw turnips, and are not interested in eating them.[4]

The goren of Ashran seem at home in the searing heat of Ashran's Molten Quarry, where they apparently subsist upon the iron ore found in the quarry and nearby Ogre Mine. Goren reproduce by laying eggs, hatching small swarms of younglings at a time.

The goren inherit the powers of whatever they eat.[5] This specifically includes elementals, but may also work for other types of beings or substances. The minerals they eat are metabolized into crystalline structures grown as scales from their arms and back. The matrix of the scales is flawless, as if produced from a forge on Argus, only natural.[6] The rocky plates the scales form have magical properties.[7] These crystals are used by some as weapons. The acid left behind can be deadly, though, even to the wielder.[8] The putrid-smelling gasses that the goren contain in their gut is extremely corrosive to almost anything,[9] but can't digest valuable gems.[10] This may help them with digestion and is likely a factor related to their acidic spit.

While it appears that goren prefer minerals, they can and will eat flesh, including that of sapient beings.[11]

Goren are strongly attracted to elemental magic.[12] They may even be able to smell the magic upon shamans.[13]

Although showing little signs of humanoid intelligence, some have been seen using tools like pickaxes.[14]