The resurrection of Gorgorek by Azuka with his Heart

Gorgorek walked on Draenor long before before the first orcs took breath. His body was eventually petrified at the salt pools in Gorgrond in an area now known as Gorgorek's Fall. The Iron Horde came across the body and found it to be a powerful weapon for war. Warchief Hellscream gave the order to Burning Blade clan to work on awakening the magnaron.[1] His heart is extracted from Cragplume Cauldron by the Druids of the Talon and the Commander. [2] The heart is kept in the Commander's Garrison. It is later stolen by Azuka Bladefury.[3] Azuka uses the heart to resurrect the magnaron and the breakers around him. Bended to Azuka's will, he was taken to Bladefury's Command in Talador. Weakened by an aerial squadron, he is taken down by the Commander and their forces.[4][5] 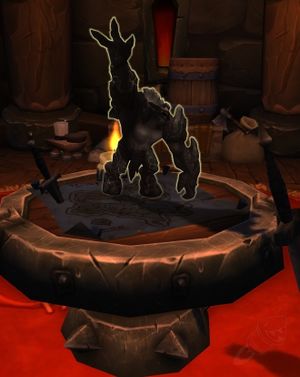