Gorlocs are "an arctic race of murloc-like creatures".[1] Most gorlocs are members of tribes that battle the tuskarr and wolvar in the Borean Tundra and Sholazar Basin respectively. The Borean gorlocs appear to be as hostile and primitive as average murlocs. The Sholazar gorlocs, the Oracles, were given intelligence and awareness by exposure to Titan technology. They are an advanced group of gorloc tribes who have formed their own faction, and are fighting the Frenzyheart Tribe of wolvar in Sholazar. They are allegedly the next evolution of murloc,[2] but murlocs apparently evolved from gorlocs, not the other way around. If they have a progenitor Ancient, it was frog-based.[3]

They are derogatorily referred to as big-tongues by the wolvar.

The gorlocs that inhabit the Borean Tundra act similar to their murloc descendants: hostile and primitive. Those that inhabit Sholazar Basin have a more complex culture. These gorlocs revere the rare albino tickbird as a sign of heavy rainstorms, good grub harvests and hibernating wolvar.[4] Above all however, they revere the Titan technology and crystals that granted them true sentience. The crystals have tangible effects on Sholazar's environment and weather. The Oracles see themselves as guardians of these powers and go to great lengths to ensure they are safe from those that would misuse it, such as the Frenzyheart Tribe of wolvar and the Scourge.

Though they are the sworn enemies of the wolvar, the oracles seem to have a nearly identical social system. Grunt work is done by the warriors, but their cultural leaders are nearly always great shamanic practitioners.[5]

Gorlocs prepare their foods with noxious spices which would sicken any other creature.[6]

The gorlocs have a saying that the more gnarled a roc's talon, the more power it holds.[7]

A tribe that consists of murlocs, deep sea murlocs and gorlocs.

The following tribes, although separate, have formed some sort of alliance calling themselves the Oracles: 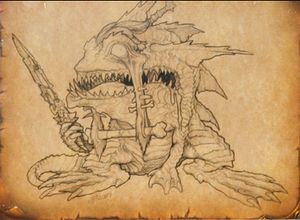 If Brann is correct about a frog Wild God creating the gorlocs, it may have been Krag'wa.