Not to be confused with Gorn One Eye. 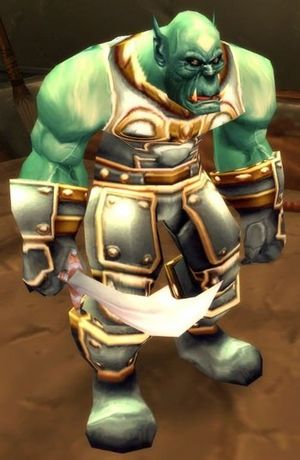 Gorn is a level 40 quest giver formerly located at Kargath in the contested territory of the Badlands. Since the Cataclysm he can be found in New Kargath.

Gorn, a blademaster and a barbarian, is the orc warlord at Kargath in the Badlands. The old orc Gorn runs the enclave, located in the northwestern area of the Badlands. Gorn and his warriors keep tabs on the renegade orcs in the eastern lands — remnants of the Blackrocks (in Azeroth's Redridge Mountains) and Dragonmaw (in Khaz Modan's Wetlands) clans. He aims to wipe out the remaining evil orcs and bolster the Alliance's confidence in the Horde.[1] He is large, even for one of his kind, and easily hefts a massive greataxe in one of his mighty fists. He wears no armor and is dressed in only a fur-covered leather wrap twisted around his waist, leaving his broad, well-muscled frame on display for all to see. From the wealth of battle scars that are visible, the orc is no stranger to combat; and, despite his savage appearance, he carries himself in an almost regal manner.

Gorn is a warrior of simple tactics, having risen swiftly through the ranks of the Horde thanks to his unmatched ability to strike hard and fast. He never offers mercy to opponents, preferring instead to grant them the honor of dying in combat. If there are any obvious spellcasters among his enemies, Gorn begins the fight by using his mirror image ability to create decoy targets for their spells. Otherwise, he prefers to rage and then close into melee combat immediately. If possible, Gorn charges the most fearsome warrior first, attacking him until he falls, and reserves mirror image for use only if the tide of battle goes against him.[2]

In Horde Player's Guide, Gorn is mentioned in a story. He is the son of Luhk the Keen-eyed and grandson of Dharl of the Thrice-Bloodied Blade. When he met an enemy in the Barrens who had "plagued" his people, it turned out to be his brother, Sesk. Sesk was bald, had scars, and had crimson eyes. Gorn thought he had been dead, but Sesk told him that he is just "reborn". He had drunk demon blood. They were last seen charging at each other.[3]