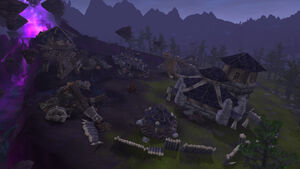 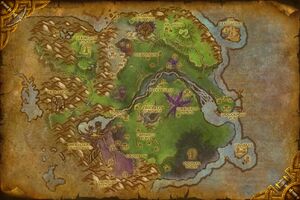 is located on the Devouring Breach's eastern side, southeast of Bloodgulch and northeast of Firebeard's Patrol. It was once a sizable Dragonmaw clan base, made up of a great hall, a kennel, a forge and protected by several watch towers and blade throwers.

The majority of Dragonmaws at Gorshak didn't survive the initial onslaught of the Twilight's Hammer on the Highlands, though some manage to endure. At some point afterwards, Mackay Firebeard and some of his clan brothers went here looking to ransack what they could to supply his clan's fight against the Hammer.[1] The surviving Dragonmaw were not happy about the dwarves taking their stuff and attacked them but the Wildhammers dealt with the orcs quickly.[2]

Before coming here, the dwarves had sent some scouts to the area including Ella Forgehammer's brother Bahrum. He was missing so she sent an adventurer to look for him. It seems that some Dragonmaw showed up at a bad time and even though Bahrum got away safely, the orcs took off with the dwarf's leggings. Ashamed of losing the pants, which were made by his sister, Bahrum wanted to recover them, and so he sent the adventurer to the keep where the orc who had taken them was. After recovering them, Bahrum returned with his sister who upon meeting asked him why he was wearing the pants backwards. Bahrum simply run off.[3][4]

Brom Forgehammer melted the Dragonmaw weapons in the war camp to make out "real" weapons out of them,[5] then they were delivered to the Firebeards.[6]