The Shrine of Gral.

The Spirit of Gral in Nazjatar.

Gral, the shark, is the loa of the sea.[1] He is worshiped by the Zandalari, at his shrine of Atal'Gral in Zuldazar. The deep ocean is his realm and the darkest ocean is his domain. He is wise and takes a long view on things.[2] Gral is quite powerful and when it comes to his knowledge of the sea, none can compare.[3] He watches over every voyage.[4] Gral does love knowing things, almost as much as Torga loves his stories, and he's not as cranky as he seems. Folks would come from all around to share their experiences with him.[5]

On Zandalar and Nazjatar, he appears as the Spirit of Gral.

Five years before the war in Zandalar, the naga tore down Gral's temple of Atal'Gral and killed every last one of his followers. The loa was furious and anyone near the water could feel his pain as each follower fell. There was a talk by the Zandalari of rebuilding the temple, but with Gral either missing or weak, it remained just talk.[6]

The naga would return years later seeking secrets at the ruins of Atal'Gral, and Gral was awakened to combat them. Gral knew that the naga were dealing with the darkness they could not comprehend and would soon become nothing more than a hollow tool to those who may answer. He could feel it beneath and around him, and so awakened from his slumber in order to defeat their local leader, Summoner Siavass.[7] Gral knew that Queen Azshara reached into a dark place from where she could not return and vowed to tear her apart himself when the time came in revenge for his followers.[8] Afterward, Gral observed the ascension of Talanji as queen of Zandalar.[9]

He later traveled to Nazjatar with his Sons. When the resident gilgoblins were almost done for, Gral found them and befriended them over a shared enemy in the naga.[10] Gral can be seen outside the waterwall. His spirit sometimes appears to attack the naga.[11]


His realm be boundless! De pressure great.
With hunger for knowledge ya never sate.
Blow de conch or bring fresh meat,
Ya find de loa that none can cheat.[12] 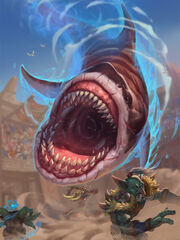 Gral descending upon the Gurubashi Arena in Hearthstone.

In the Hearthstone expansion Rastakhan's Rumble, Gral serves as the patron of Gral's Sharks, a pirate-themed team of troll rogues, and personally appears as a legendary rogue card. His flavor text reads: "“… We’re gonna need a bigger board.”"