Not to be confused with Gral's Bounty. 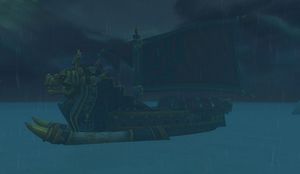 Gral's Call was a flagship of the Zandalari Golden Fleet, named for the great shark Gral, loa of the oceans. Under the command of Captain Zalkran, the ship may have been stationed with Zandalari forces in Pandaria, before being ambushed and destroyed by the Alliance on its return to Zandalar.

Little is known of the past service of Gral's Call, though it was absent from Zandalar and the rest of the fleet for the opening stages of the Fourth War. At the time, the Alliance was aware of the dispositions of the rest of the Golden Fleet, though the existence and location of Gral's Call was not known.

During an Alliance strike against Zuldazar, the presence of Gral's Call was discovered in records recovered from the Breath of Pa'ku, and it was believed to have been en route from Pandaria.[1] On the last leg of its journey home to Zandalar, Gral's Call spotted the new Alliance outpost at Xibala along Zuldazar's southern coast.[2] Alliance forces responded quickly to the flagship's arrival, which threatened the secrecy of the outpost. Portals were opened to allow Dark Iron dwarf grenadiers to board the vessel, where they clashed with the Zandalari crew.[3] At the same time, Captain Zalkran attempted to flee to report the location of the Alliance.

High Commander Halford Wyrmbane himself, accompanied by an Alliance champion, worked their way through the ship to kill Advisor Ko'jan, though the captain had already fled.[4] Luckily, Zalkran was captured shortly after by General Shandris Feathermoon and Falstad Wildhammer, thus preventing any troll from escaping the ship. With Gral's Call secure, the Alliance evacuated the ship before destroying it from a distance with explosives.[5] Captain Zalkran was subsequently sent to the Stockade in Stormwind City.