Army of the Light

From Wowpedia
(Redirected from Grand Army of the Light)
Jump to: navigation, search

The Grand Army of the Light, also called the Golden Army, the Army of Light, and the Lightforged,[5] is a faction of enlightened races that the naaru said would one day combat the ravages of the Burning Legion. After the fall of Argus, the draenei's finest warriors followed the prime naaru Xe'ra across the cosmos in an eternal war to bring about the Legion's end. Since then, other survivors of the Burning Crusade have joined the ranks of the Lightforged.[1]

After finally achieving victory on Argus, High Exarch Turalyon believed that it was time to take up arms alongside their brothers and sisters of the Alliance and pledged their forces to High King Anduin Wrynn.[4][5]

When the naaru came to the Prophet Velen and rescued the draenei from the fury of Kil'jaeden, they promised that the Exiled Ones would one day be part of a grand force.[6] The Army of the Light arose from the survivors of worlds destroyed by the Burning Legion[7] and had been battling the demonic army for thousands of years.[8] The Lightforged were another group of draenei who boarded the Genedar when they left Argus. The Genedar then split into two different ships, the Genedar and Xenedar, and went their separate ways.[9] After the crash of the Genedar, the draenei on Draenor tried to contact the Army.[10]

The draenei have awaited the day when the Army would emerge for more than twenty millennia. One of the Prophet Velen's many visions was of the Army of the Light: a grand coalition of humans, dwarves, gnomes, elves, worgen, orcs, tauren, trolls, goblins — and even the undead. The draenei themselves are foretold as the backbone of this mighty army, with many naaru joining the fray against the darkness, along with an innumerable amount of dragons and naaru. The leader of this great coalition, clad in Light-imbued armor with a matching blade, is a human of unclear identity. The vision met its end after a great and terrible shadow cast its darkness over the defenders of the Light, though the army only charged to meet it in battle.[11]

Right before the invasion of Outland began, Khadgar and Velen reached out to the naaru independently, both seeking aid against the dark forces amassing on Outland. The Army of the Light heard their pleas but the Army's battles with the Legion were costly and ceaseless, so they could not spare soldiers to protect Outland. Instead A'dal, M'uru, and O'ros volunteered to help the people of Outland and arrived with Tempest Keep.[12]

In World of Warcraft: Illidan, an "elder naaru" shows a possible future in which Illidan Stormrage is one of the leaders of the Army of the Light, fighting the Burning Legion and the Void with other champions. His Warglaives of Azzinoth glow with the Light. His features are described as "calm and strong and at peace. His face was filled with confidence, shorn of all suffering."

At some point, the dreadlord Lothraxion was infused with the Light and joined the Army of the Light to fight against the Legion as its High Commander. During the Burning Legion's third invasion of Azeroth, Lothraxion was sent by High Exarch Turalyon to protect it.[13]

The Army of the Light has been at war with the Legion on the ruined draenei homeworld of Argus for centuries, engaging in tactical guerilla strikes using their warship, the Xenedar. While outnumbered, they continue to fight with cunning, striking at points of opportunity quickly and moving on.[14] According to the Prime Naaru Xe'ra they are losing, however, and as such have sent Light's Heart, the core of Xe'ra, as a last resort to Azeroth for it to be handed to Prophet Velen. Xe'ra is seeking the "child of Light and Shadow", Illidan Stormrage, to bring the battle to an end.[7]

After the Legion's defeat during the Argus Campaign, the Army of the Light traveled to Azeroth. Foreseeing the upcoming war between the Alliance and the Horde,[17] the Lightforged decided to stand alongside their brothers and sisters of the Alliance. The Lightforged draenei and Turalyon thus pledged to defend the Alliance[5] and seek to spread the Light's justice across the land.[18] 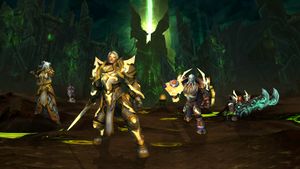 The Army of the Light.

After the fall of Argus, the draenei's finest warriors followed the prime naaru Xe'ra across the cosmos in an eternal war to bring about the Legion's end. Since then, other survivors of the Burning Crusade have joined the ranks of the Lightforged.