For his strategy on the encounter, see Balnazzar (Classic).

Saidan Dathrohan was one of the first five paladins of the Knights of the Silver Hand along with Uther the Lightbringer, Turalyon, Tirion Fordring, and Gavinrad the Dire. After the Third War, he subsequently formed the Scarlet Crusade, which he led as Grand Crusader. He was later killed by the dreadlord Balnazzar, who would possess his body in order to impersonate him and manipulate the Crusade from within.[1] 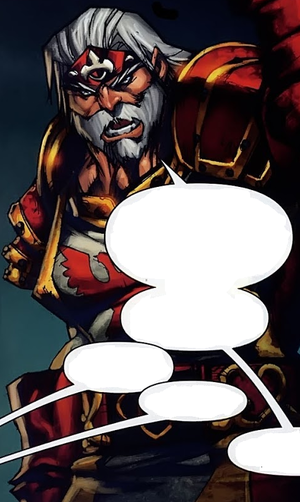 Saidan Dathrohan in the Ashbringer comic.

Saidan Dathrohan was nearly six and a half feet tall[2] and originally a knight of Lordaeron. He eventually found faith and got closer to the Church of the Light, studying under the guidance of Archbishop Alonsus Faol. At the beginning of the Second War, he was chosen by the Archbishop as one of the four candidates from Lordaeron to start the order of the Knights of the Silver Hand, along with Uther, Tirion Fordring, and Turalyon.[3] Faol presented each of the paladins with enchanted librams during their training that were among the church's most ancient relics. Each libram represented a core trait of the Silver Hand that Faol challenged his students to become the living embodiment of. Saidan was given the Libram of Holiness.[4] During Tirion's ceremony of initiation into the order, Saidan, who was one of his closest friends, was in charge of placing the silver plates upon Tirion's shoulders.[5]

Years after the Second War, he, Tirion, Uther and the fifth knight Gavinrad the Dire were present during Arthas' ceremony to become a paladin, in Stormwind City.[6]

A few years before the Third War, Saidan, then Lord Commander of the order, established himself in Stratholme. He was the direct superior of his friend Tirion, who lived in Mardenholde Keep and ruled over the province of Hearthglen. Saidan was called to Hearthglen by the paladin Barthilas, who was suspicious of Tirion's intentions towards an orc that had been found in the area. After Tirion tried to stop Saidan and his men from capturing the orc, Saidan was forced to imprison Tirion and take him to be judged for treason in Stratholme. Saidan was a witness in Tirion's trial, which eventually ended in Tirion's exile and the subsequent draining of his powers of Holy Light. He did not want Tirion to end up like this and had hoped that Tirion would redeem himself. Saidan was also present in Stratholme when Thrall invaded the city in order to free the captured orc, with Tirion's help.[5]

During the purification of the dark crystal brought by Mograine, Saidan arrived to announce that Arthas had gone mad, and suspended the Silver Hand paladins from service. After the death of King Terenas, Saidan led the remaining members of the order to fight against the Scourge. During an assault on the Scourge-held city of Stratholme, Saidan was separated from the others and captured by the Dreadlord Balnazzar. The demon slew him[7] and possessed his body, which he prevented from decaying with his magic.[1] 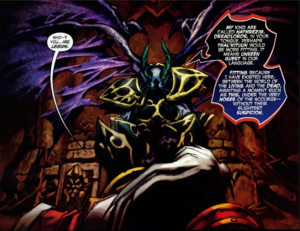 Saidan later corrupted Renault Mograine, convincing him to kill his father. Once High Lord Mograine was murdered, Saidan became the leader and Grand Crusader of his new created order: the Scarlet Crusade. He blessed Renault as Commander of the Scarlet Crusade. Other leaders included Isillien and the Abbendises. Balnazzar used Saidan's form to slowly transform the Crusade into a paranoid regime.

After witnessing the fall of Lordaeron and his comrades, Sir Thomas joined the Scarlet Crusade. When Thomas was ordered to kill a "plagued" village, he mistakenly killed his own family. Thomas went mad from grief, and was knocked out and forced into confinement by his fellow Crusaders. During his confinement Sir Thomas' insanity steadily grew worse and he began muttering demented little rhymes in different pitches and tones, which made his guards very nervous. Saidan came up with a plan on how to help him - to send him to fight the undead on the upcoming Autumn holiday. However, this only made Thomas' insanity intensify as he slew both friend and foe alike, and the Crusaders were forced to kill him by cutting off his head. Afterward Thomas was wrapped in cloth and was about to be prepared for cremation when Saidan proposed to prepare the body himself. Once alone and out of earshot, Balnazzar emerged from Saidan's corpse and using his own blood, infused Thomas' body with fel energies to raise Thomas into the Headless Horseman to spread fear and chaos during the holiday that is meant for giving peace of mind and hope for the future, Hallow's End.[8] 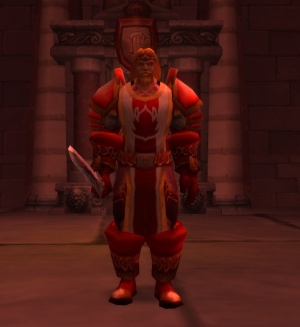 From the Scarlet Bastion in the ruins of Stratholme, he directly led a group of elite Crusade warriors known as the Crimson Legion and manipulated the two supreme chiefs of the Crusade, Grand Inquisitor Isillien and High General Brigitte Abbendis. When Taelan decided to rejoin his father, Saidan sent Isillien to kill the Fordrings and the adventurers.[9]

Jarien and Sothos, decided to join the Scarlet Crusade upon the disbanding of the Veiled Blade. They were slain by Grand Crusader Dathrohan for failing the initiation rites inside his chamber in the Scarlet Bastion.

Balnazzar under the guise of Saidan was killable by the players, thus destroying Saidan's human remains.

By the time of the Cataclysm, Saidan's remains appear to be no more, as Balnazzar has completely shed his disguise and slaughtered the Scarlet Crusaders in Stratholme and transformed them into the undead creatures they once hated.