For the area in the Black Temple, see Grand Promenade. 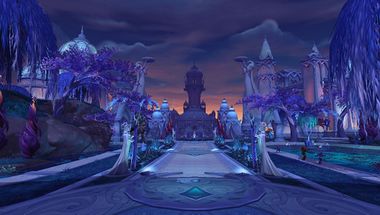 Main thoroughfare of the Grand Promenade, with the Nighthold visible in the distance

The Grand Promenade is a major thoroughfare located in the northwest of the nightborne capital city of Suramar. It is the main area of the upper and outer tier of Suramar City, mainly to the west. Also on this tier is the Lunastre Estate on the western end and the Twilight Vineyards making up most of the eastern section. Its statues, water gardens, ornamental plants, and ornate walkways make it one of the more elegant areas of Suramar City.

The Promenade is a mainly open space of winding paths and decorative gardens, though it also hosts a number of shops, houses, and secluded alcoves. Many areas of the city can be accessed from the Grand Promenade, including the Menagerie and Sanctum of Enlightenment to the east, the Concourse of Destiny and the city's lower levels to the southeast, and the Sanctum of Order and Lunastre Estate to the southwest. The Promenade is also connected to a road that leads out of the city and into the wider Suramar region.

The Promenade's central location at the edge of the city would ultimately make it a major first target for the rebels during the Nightfallen rebellion when they and their elven allies finally marched on the city proper. In the opening stages of the campaign, the Nightfallen successfully secured the Grand Promenade and much of the surrounding area before eventually pushing deeper into the city.

The Grande Promenade was located at the very edge of Suramar City for the 10,000 years it remained isolated under its arcane shield following the War of the Ancients. Though its role as a gateway to the city was made redundant at the time by the shield, it nonetheless represented a graceful and important area of Suramar. The area was heavily patrolled and administered by the Duskwatch, the nightborne police force, with the upper sections of both the Sanctum of Order and the Sanctum of Enlightenment (two of their major bases) opening onto the Promenade.

The Promenade was not seriously involved in the early events of the Nightfallen rebellion, nor relatively speaking by the arrival of the Burning Legion.

The master jeweler Lespin Silverleaf operated his business from the far west of the Grand Promenade at this time, though he was soon replaced by his apprentice, Apprentice Ardrias, when he perished during one of his schemes.[1] The fruit merchant Keelay Moongrow, from his establishment near the central Promenade, also carried out numerous plots to discredit and sabotage rival sellers, often using underhanded means.[2]

The nightborne Astoril was based from a residence on the Promenade near the entrance to the Terrace of Order. Under the guise of helping exiled nightborne to secretly reenter the city, he was, in fact, luring many of them to Felsoul Hold in service to the Burning Legion. He was eventually slain in this enterprise by a member of the Nightfallen.[3] 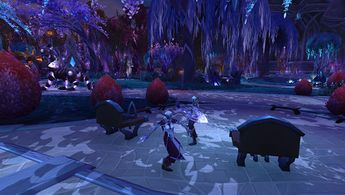 Insurgents and loyalists clash during the battle for the Promenade

The Grand Promenade truly rose to prominence in the Nightfallen rebellion during its latter stages, when the combined armies of the Nightfallen rebels, Kirin Tor, night elves, blood elves, and high elves began their siege of Suramar City to depose Grand Magistrix Elisande and expel the Burning Legion.[4] Having established several camps outside the limits of the city and Grand Promenade, the insurgents next tried to seize control of the thoroughfare to eventually march on the Nighthold itself.

Great amounts of Duskwatch defenders were brought up to the outer areas, and portals were opened by the Burning Legion to bring major reinforcements to the front. As the attackers' front line troops engaged the loyalist and demonic defenders, agents infiltrated the Promenade itself and began to undermine its formidable defenses. Through the efforts of Sentinel Moonshade, the crystals powering the Legion's portals were destroyed and the eredar Overseer Ingra was slain, effectively cutting off any demonic reinforcements to the battle.[5][6]

At the same time, Magus Sendath began to work against the defensive efforts of Arcshaper Thorendis. In charge of the Promenade's defenses, Thorendis created a large magical shield as well as portals to hold back the invaders' advance into the city. Having succeeded in bypassing the arcshaper's barrier, Magus Sendath and his allies managed to defeat him, thus removing another obstacle from the assault on the city.[7]

As fighting continued to rage across the Grand Promenade and the rebels gained the upper hand, the Grand Magistrix's forces attempted a desperate measure in reactivating the Arm of the Magistrix, the most powerful construct if its kind ever created. The insurgents, however, were successfully able to defeat the construct in the nearby Crimson Thicket, and in so doing struck the final blow in the seizure of the Grand Promenade.[8]

In the aftermath of the battle, the majority of the invading forces pushed on to the Concourse of Destiny and eventually the Nighthold itself, though troops were left behind to hold the central area of the Promenade from counterattack and keep the path through the city open.