Ride a felbat to the upper vault.

You heard what Maiev said. We need to get out of here.

There is an elevator shaft at the far end of these caverns. Let us make our way there.

Kayn and Altruis said you would be coming. Just in time, <name>. 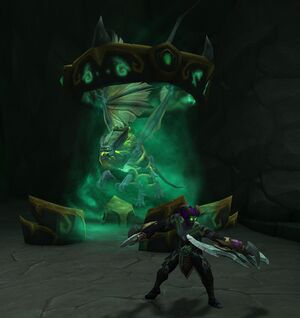 On accept, Kayn and Altruis run out of the Vault of the Betrayer, despawning shortly after re-entering the Tomb of the Penitent.

Head up the western ramp, where Lyana Darksorrow, Cassiel Nightthorn, Marius Felbane, and several Freed Illidari are holding off waves of Legion forces. Upon running past them:

Near the top of the ramp is an inquisitor vignette named Kethrazor, whom you can optionally kill for his

[Inquisitor's Glowering Eye]. Continue along the path until you reach the elevator platform, where Jace Darkweaver is waiting with a captured Vampiric Felbat along with a couple more Freed Illidari.

Jace Darkweaver says: Kayn and Altruis have already gone ahead. Take this felbat and join them.

Jace has some dialogue about the felbat:

These beasts are quite feisty, unless you know how to deal with them. This one should listen to your commands... for a little while, at least.

Interact with the felbat to mount it and automatically ascend through the Fallen Passage. During the ride, Bastillax chimes in again:

Bastillax says: Your persistence is admirable, but my demons have infiltrated every floor of the Vault. Only death awaits you.

The felbat drops you off at the entrance to the Demon Ward, where Allari, Kor'vas, and Falara are waiting.

Kor'vas Bloodthorn says: This is sheer madness! The Wardens have lost control of their prison.

Talk to Kor'vas to turn in.