For the character from an alternate universe, see Vorpil Ribcleaver.

Grandmaster Vorpil is the third boss of Shadow Labyrinth in Auchindoun.

Near the end of the war against the draenei, Gul'dan dispatched Vorpil alongside Blackheart the Inciter to investigate Auchindoun. After surviving the explosion that destroyed most of Auchindoun, they remained there for many years.

In time, Ner'zhul, Teron Gorefiend and Kilrogg Deadeye fled to Auchindoun to take shelter from the pursuing Alliance armies. They had been unaware of the presence of other orcs here, but Vorpil and Blackheart welcomed them. When presented with news of the betrayal of Gul'dan, Vorpil pledged himself to Ner'zhul. When Danath broke into Auchindoun to rescue Kurdran, Vorpil and Blackheart fought to stop them, but were beset by ghosts of dead draenei. In the confusion, Danath slew Kilrogg Deadeye in single combat. Ner'zhul and Gorefiend teleported themselves to the Black Temple, and Vorpil and Blackheart fled back into the Shadow Labyrinth.[1]

Till this day they remain there, tempering with cosmic forces such as Murmur. Their followers form what is known as the Cabal. By his name, it is guessed that he is the Grandmaster of the Shadow Council in Shadow Labyrinth.

In the early days of the Horde, Grandmaster Vorpil convinced the orc warlock Gul'dan to allow him to investigate the mysteries of Auchindoun, secretly desiring to harness the energy of the frighteningly powerful cosmic essences that permeated the area. 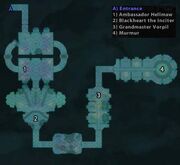 Grandmaster Vorpil can be found at map location 3.

The fight starts as soon as one of the players moves close enough to Vorpil to aggro him. The entire room will aggro so the room must be cleared before engaging. Vorpil will immediately open the Void Rifts around him, and Voidwalkers will start spawning, at an increasingly faster rate as the battle progresses. Vorpil will engage his aggro target in melee combat, always attempting to stay in melee range. After some time has progressed, Vorpil will cast Draw Shadows teleporting the party and himself to the pedestal he started on, and immediately cast Rain of Fire. Usually following Rain of Fire Vorpil will also cast Shadow Bolt Volley, whereupon Vorpil will engage the player with the highest threat in melee combat again until the next Draw Shadows is cast. This continues until every member in the party is dead, or Vorpil is killed, at which point the Void Rifts close, and Voidwalkers disappear.

The most common strategies for defeating Grandmaster Vorpil are to stem the flow of voidwalkers by killing them, to maneuver Vorpil around so that the voidwalkers never reach him in order to explode, or to burn him before they are numerous enough to cause a problem. Either way, the battle outcome will be dictated by how well the group manages these voidwalker spawns, as their spawn rate will soon cause the group to be overwhelmed, and the chain of exploding voidwalkers will quickly kill the party.

This strategy utilizes the slowness of the voidwalkers to the max. During the fight, all DPS is focused on Grandmaster Vorpil at all times. The main tank, who must at all times hold aggro, will move down one of the hallways, forcing Vorpil to follow him. The voidwalkers will slowly funnel down the hallway, away from their spawn locations towards Vorpil.

Typically the first kite is to the south, as there is more available kiting distance. It can be useful to station the group, other than the puller, about two thirds of the way to the south end of the room and immediately pull Vorpil to that location, just beyond the maximum distance the voidwalkers will reach before the teleport. This eliminates potential difficulties with maintaining targeting and damage during the kite. It also helps prevent voidwalker healing if the tank losses aggro, as Vorpil is less likely to be running into voidwalkers in that case.

At the time of the Teleport, everyone in the party exits the Rain of Fire to optionally kill any voidwalkers dangerously close to Vorpil, then head down the opposite hallway of the last kite. The main tank, who will remain the highest threat to Vorpil, will immediately head down the hallway in the opposite direction of the first kite. The time before the next teleport will give the voidwalkers enough time to funnel down the new hallway, and the process is repeated until Vorpil is dead.

During the time of the Rain of Fire, and before the tank is on top of Vorpil again, the party must take care not to take aggro from the main tank, and if that happens, they must be careful to kite Vorpil to the main tank again.

There are dangers to the strategy just described, although its principles are sound. Often, the group will become confused by which direction they are supposed to go, Line of Sight becomes an issue, and northward kites tend to place voidwalkers right on the teleport destination. Less organized groups with low DPS may prefer a method known as The Metronome.

In it, Vorpil is always directed south - but towards the walls of his room, in an alternating west-east pattern.

1. Beginning with the southwest position, the tank must pull Vorpil onto the nearest skeleton mound and establish solid aggro. As the voidwalkers near, draw Vorpil further south, onto the next skeleton mound. Once there, take him west against the wall, allowing for the best Line of Sight to the pursuing party members, and hold him there until the teleport occurs.

2. After the teleport, run up the mound to the east, even into the niche in the wall, to make Vorpil's approach angle as extreme as possible. When he has passed the pack of voidwalkers, exit the niche, continue south, and then head for the east wall.

Repeat 1 & 2 until Vorpil dies. Absolutely no voidwalkers need to be killed using this method, though it does get scary after the fourth teleport.

This method can be made even easier with a

[Misdirection] pull, and with

[Frost Nova] on the pack of voidwalkers after each teleport.

Note: Make sure to clear all skeletons from the mounds immediately prior to pulling him. There are a few spawns far up on top that do not pull with the lower-down ones.

If you are having trouble killing him on heroic mode, try this strategy. Assign one person to kill as many of the voidwalkers around the platform as possible, while the other four party members do the north-south kiting described above. This way, you will have less healing and explosions during a teleport. Frost nova, slowing trap, etc. also helps during teleports, especially later in the fight when there are more of them.

When the fight starts, the party will be given some lead time before the Voidwalkers approach Vorpil, since they move so slow. If the party can muster enough damage output before the first and second teleports, it is possible to wear Vorpil down before Voidwalkers are so many they become a problem.

This strategy offers a much less chaotic fight, and you can easily have him dead after the first summon.

Pull Vorpil to the right mound next to his dais. Assign the lowest direct damage DPS to kill voidwalkers as they move up the hill. Shadow Priests are great to use, as they will be in constant Spirit Tap while nuking the voidwalkers, and can place DoTs on Vorpil. Placing Vorpil on the mound for the fight funnels all his void walkers into a few paths and makes killing them much easier. It also makes this fight much easier for even average tanks to maintain aggro.

Vorpil's first summon occurs around the 40 second mark, so you can easily be ready for it. Jump off the dais, all DPS moves to the mound and have the tank waiting below to walk him back to the top of the mound. Repeat until dead.

Before the fight, all members of the party move to the western ledge of the platform as you face him; if the party hugs the wall, they can all move into position without aggroing him. The tank pulls Vorpil to this ledge, and the party members pour on the damage until he is dead. With a decently high DPS group, it is possible to bring him down to under 20% before the first teleport.

After the 'port, the party returns to their spot on the ledge, and continues the fight after the tank regains aggro.

If the DPS isn't high enough to take him down before the voidwalkers become a problem, the party can move the fight behind the column in the northwest, making it more difficult for the voidwalkers to get to him do line of sight.

If you have a druid tank, you can also have him switch to his DPS gear, and have all four DPSers go all out on him straight-away. He hits for very little, so any decent healer can heal a clothie with aggro. Just be sure to keep standing still if you have aggro, so as to allow the melee to be in range. A variation on this strategy is to have the healer doing damage as well; a well-geared shadowpriest will be able to do a substantial amount of damage while also keeping the party up.

“Teron Gorefiend? It…yes, it feels like you, trapped within that rotting meat. What has happened to you? What dead thing do you drape about your spirit like a cloak?”[2]

Intro
Keep your minds focused for the days of reckoning are close at hand. Soon, the destroyer of worlds will return to make good on his promise. Soon the destruction of all that is will begin!

Summon
Come to my aid! Heed your master now!

Draw Shadows
The darkness in your souls draws you ever closer...