Grandmatron Tekla is an elderly orc quest giver found in Southfury Watershed and the grandmother of Raggaran. She was a powerful shaman in her time, but is no longer physically able to endure the elements, and she is thankful to the adventurer for the assistance. Finding and escorting her is part of Thonk's assignment to help the survivors of the flooding that occurred with the cataclysm.

Upon reaching an area that would require wading in some shallow water, she casts

[Water Walking] on both herself and the player. She will later cast Air Spirit's Boon on herself to allow her to fly the rest of the way to Raggaran.

Grandmatron Tekla is somewhat difficult to find and her escort quest goes slowly. It is advisable that one do Raggaran's quests first when coming from Thonk. During

[9] Raggaran's Fury the quest tracker should point in the direction of Grandmatron Tekla.

Upon turning in Thonk's questline, he will ask, "How'd you make the old woman fly, by the way?"

The subject of this section was removed from World of Warcraft in patch 6.2.4. 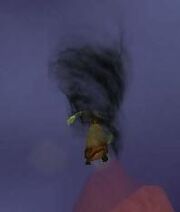 She will go high enough in the air to get Thonk's attention.

Grandmatron Tekla says: Let us be off then. Take me to my grandson Raggaran.

On reaching some water:

Grandmatron Tekla says: I'm tired of wading in water. Let's make this a little bit easier on ourselves, shall we? Spirits of water, come to my aid!

Water Walking — Grants target the ability to walk on water for 10 min on herself and her escort.

A short distance after crossing the water:

Air Spirit's Boon — Asks for the blessing of the Air Spirit. This blessing envelopes her in a mini-tornado which lifts her into the air and carries her the remaining distance to Raggaran.

Grandmatron Tekla says: We can continue now, I think. Let us press on.

On reaching Raggaran, she will land and greet him.