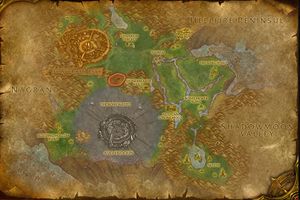 Grangol'var Village is a ruined village located just north of the Bone Wastes, Terokkar Forest. It is occupied by numerous Shadow Council warlocks of diabolical intent, all led by Shadowmaster Grieve. Adventurers, at first, do not know what group controls Grangol'var Village, but after infiltrating the village with disguises during the quest Who Are They?, they find its true purpose. Grangol'var Village is an Orc archaeology dig site and contains a ruined barracks.