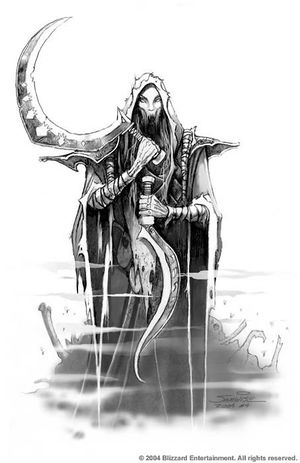 The graven one seeks power from the deep well of death instead of from supplicating dark powers or acting as a sycophant for demonic entities. Unwholesome rites, sigils, and the shedding of one's mortal shell are all a small part of what graven ones seek. Eventually, they become masters over undeath. The graven ones' necromantic abilities make them natural allies of the Scourge, though many are Independent. The graven one must show that they have an affinity for death by spending at least one night buried in a graveyard during a new moon. The graven one concentrates on the creation, control, and conjuration of undead creatures. Unlike a necromancer, who preys upon the living for life energy, the graven one seeks to create undead in a perfect state to serve them as faithful and undying servants.