From Wowpedia
(Redirected from Gray bear)
Jump to: navigation, search 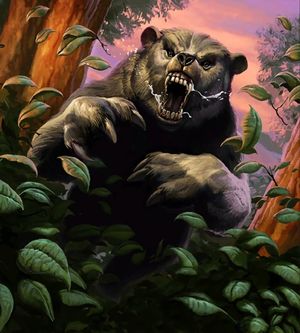 A bear in the TCG.

[The Greatest Race of Hunters]

The Forsaken despise bears, considering them soulless beasts put upon the earth to torment them. They have devised a way to make use of the bears so that they may serve some purpose — they use the living bears at their spider farm as living egg feeders. The spiders lay their eggs in the bear flesh and the eggs thrive off of the meat and blood of the beasts.[2] Infested cubs still listen for the telltale buzzing of bees even though they can no longer taste honey.[3]

Though bears normally appear to be solitary, the Shardtooth bears of Winterspring hunt in packs to bring down chimaeras or owlbears.[4]

The fearsome Darkmoon dancing bears have a habit of suddenly breaking out into dance amid battle, much to the annoyance of their riders.[5] The armored brown bear's swiftness is enhanced by its heavy armor, imbued with magic from Kirin Tor magi.[6] The bears of Dun Morogh are prized for their hardiness, loyalty, and combat prowess. Their time among the dwarves does little to curb their ferocity.[7]

The frost vrykul believe that wearing a necklace of polar bear claws will grant them otherworldly strength.[8] The Hyldnir ride arctic warbears in their Hyldsmeet competition, but they don't give out a warbear to just anyone.[9] The Amani trolls decorate the ferocious Amani battle bears in magic amulets and ceremonial masks as a way to venerate the bear god Nalorakk.[10]

The rare baby blizzard bear is bred for its small size and perpetually youthful appearance.[11] The fur of the Darkshore bears owes to the almost perpetual gloom they live in, and their vision in the darkness is uncanny.[12] The bear cubs of Hyjal suffered much during the Cataclysm. On the bright side, the devastation also led to their newfound love of heights and daredevil stunts.[13]

A bear's meat, including the snout,[14] are suitable for consumption.[15] It's even a delicacy to the frostsabers of Winterspring.[16]

A bear's tongue is surprisingly very toxic, which may be the reason it finds use in many blight potions.[17] Their brain is used in a powerful serum to help feral worgen return to their human form,[18] their hide is used in taunka funeral rites,[19] and to fashion armor,[20] their heart can be combined with spider blood to form a deadly poison,[21] their claws make for a great spirit-warding totem when combined with a spider's eyes,[22] and their musk is a popular fragrance among Stormwind nobles.[23] 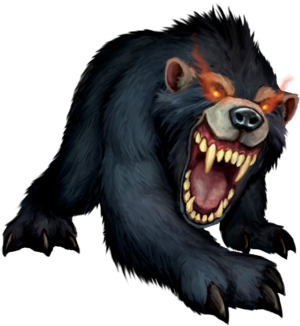