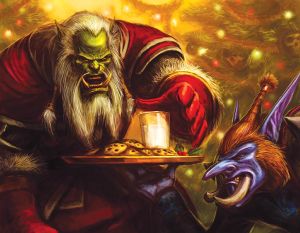 Great-father Winter is a level 30 quest giver located in the Valley of Strength in the orcish capital city of Orgrimmar. He is only available during the Feast of Winter Veil event. He is the Horde version of

He starts and ends the quest:

He ends the following quests: 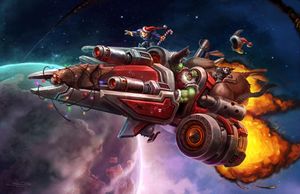 How he gets around.

The term "Winter Veil" is said to stem from a supernatural being referred in many cultures to as Greatfather Winter. As he would walk the land late in the seasons, winter itself would be his billowing cloak. In his wake was the blanketing of the land in snow, and thus it is said that Greatfather Winter would cast his wintry veil over the land. Though parts of Azeroth may lie in snow, it gives the land time for rebirth and renewal.

Greatfather Winter is now seen as a kind old orc, or dwarf, who brings presents to everyone. Although many people, such as lorekeepers, have their thoughts about this commercializing of the old god by the Copperpinch and Jinglepocket families (members of the Smokywood Pastures arm of the Steamwheedle Cartel goblin faction), it is a nice idea nonetheless.

When you talk to Greatfather Winter, he will respond in one of the following ways: