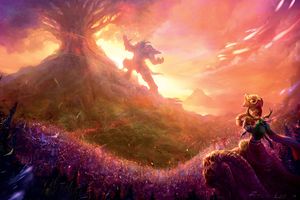 The allied soldiers fight near the site of the second Well of Eternity.

The Great Alliance is the term used for the alliance between the Horde, the Human Expedition and night elves at the Battle of Mount Hyjal.[1]

Birth of the alliance

After being guided to Kalimdor by Medivh, the Orcish Horde led by Thrall and the Alliance forces led by Jaina Proudmoore had come into conflict with each other and with the night elves of Ashenvale, led by Malfurion Stormrage and Tyrande Whisperwind. Acting as a peace broker, Medivh was able to unite the warring factions to defend the World Tree, Nordrassil, from the Burning Legion's assault.[2]

Modern Azeroth is what it is now because of this alliance. If not for its existence to stop the Burning Legion, the planet would've been dominated or destroyed by demons. Instead, the Burning Legion lost the Third War, suffered massive losses and most of its main command was slayed. The political scene inside the Alliance and the Horde suffered great influence of this alliance as well, such as the night elves becoming members of the Alliance after being exposed to the outside world once again, the Orcish Horde and the humans from Theramore forged a non-aggression pact, and so on.

The army itself was forged and organized by Malfurion Stormrage, who led them as one force against the Burning Legion.[3]