For the kodo seen during the event, see Great Brewfest Kodo (NPC). 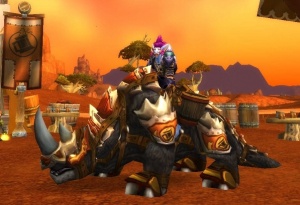 Great Brewfest Kodo can possibly be obtained inside the

[Keg-Shaped Treasure Chest] awarded once-per-day for killing Coren Direbrew in Blackrock Depths. It is available to players from both factions during Brewfest.

Coren Direbrew won this prize after drinking a Tauren druid under the table - and the druid was in [bear form]. It was one of Direbrew's proudest moments.

[Have Keg, Will Travel] and the Feat of Strength