This article is about the Dark Portal in the film universe. For the portal from the main universe, see Dark Portal. For other uses, see Great Gate (disambiguation). 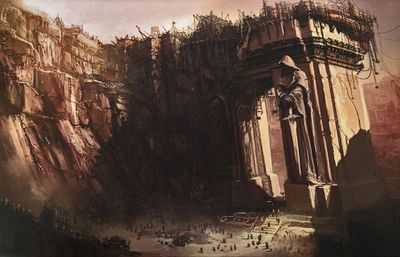 Concept art of the Great Gate

The Great Gate[1] or Dark Portal[2][3] refers to a pair of vast portals, serving to connect distant locations, most infamously the worlds of Draenor and Azeroth.

The Draenor-side of the Great Gate is located in a sandy region of Draenor, while the Azeroth-side is located in the Black Morass, on the south-eastern edge of the Seven Kingdoms.

The Horde await the opening of the Great Gate

The Draenor-side of the Great Gate was not built by the orcs, but excavated from deep beneath the sand. The ancient artifact had long lain hidden in the earth, before Gul'dan's magic led him to it.[4] The orcish Horde then began to excavate the portal, removing the earth surrounding it to reveal the still-upright gate. The origins of the gate prior to its discovery by Gul'dan are unknown, although he was almost certainly guided to it by a possessed Medivh.[5] It was Medivh who taught Gul'dan about the gate, making the invasion of Azeroth possible.[6]

The excavation site was so vast that the entire Frostwolf clan could have fit within only its smallest fraction, and all could have run shoulder to shoulder through the gate itself.[7] The two hooded figures set each side of the gate were each the height of one hundred orcs.[7] The portal's left column was left attached to an outcrop of the massive excavation site, although the rest of the structure stood unsupported. Despite not being built by orcish hands, the structure was cluttered with scaffolds and lifts to ferry the many orcs working on the portal. In order to power the opening of the portal, many cages containing draenei prisoners were placed around the structure, including some children.[7]

The Dark Portal was first opened by a fel-possessed Medivh, who would not remember his actions in the event until much later, with the assistance of Gul'dan from the Draenor side. The exact involvement of Medivh is unclear, but likely involved the correct incantation to make the opening of the portal possible, responsible for the green glow that appeared around the frame prior to the opening of the portal itself. For his part, Gul'dan served to provide fuel for the portal's magic - namely the life energy of a huge number of imprisoned draenei, killed in seconds by the warlock's fel magic. As the draenei's life was drained agonisingly away, blue-white swirls of energy could be seen to funnel toward Gul'dan, who after a moment basking in its power, directed it toward the portal, causing it explode into a pulsating, emerald green, which quickly blurred into the colours of the sky and trees above the other side of the portal.[8] 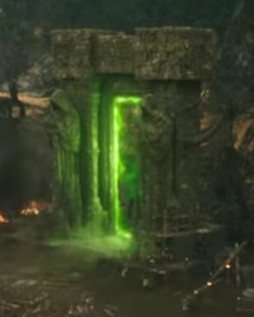 The Azeroth-side of the Dark Portal was first created as a temporary gateway without frame, set horizontally into the marshy earth of the Black Morass. The opening of the temporary portal caused the immediate area to be destroyed, and nearby trees to topple into it. The portal lasted only a number of minutes, during which time the Horde's warband passed through it into Azeroth; after this it vanished, leaving a barren area where it had been.

Travelling through the portal was a strange, weightless journey through a dark tunnel, with the destination at first only a pin-prick of light at its end. The travellers span and wheeled past each other, strange currents pulling at them, as objects from both sides met in the dark expanse. The sounds of the worlds at each end were muffled, with blinding blasts of light punctuating the darkness. Draka's journey triggered the premature delivery of her child, Go'el, more than a month in advance; he was stillborn.[9]

A stone portal mirroring that on Draenor was later built by the orcs who had arrived through the temporary one, with the intention of bringing the rest of the Horde through to Azeroth. The figures on each side were intended to depict Gul'dan's "benefactor", in fact the hooded Medivh.[10] The portal and its statues were built fairly crudely out of rocks found in the surrounding area, but still bore a striking resemblance to the Draenor-side gate, no doubt due to Gul'dan's directions.

A possessed Medivh later spoke the incantation to open the finished portal, but was killed before it could become permanent, although many orcs did pass through. The dying Guardian, freed from his corruption, then used his dying breath to open a temporary portal between the Black Morass and a location just outside Stormwind city, for the human army and prisoners to pass through, but was only able to keep it open for a few minutes before expiring.

The origins of the Great Gate are currently unclear, as is how and why it became buried beneath the sands of Draenor. It was clearly familiar to the entity possessing Medivh,[6] and was also known to the Kirin Tor, as shown by Antonidas' response to Khadgar.[2] Khadgar read of the gate, including a prophetic depiction of the orcs climbing out of the temporary portal in the Black Morass, in a tome stolen from Karazhan, which he was guided to by the ancient entity Alodi.[11] A scribbled note on the margin of that page bore the cryptic message "From light comes darkness, and from darkness, light. Ask Alodi.",[11] and her response to the term "dark portal" (see below) strongly indicates a familiarity with the gate.[2]

The portal is termed the "Great Gate" by Garona, apparently translating from Orcish, since the same name is used by the other orcs in their own tongue. It is often referred to more generically as a portal or gate.

While exploring the tome he stole from Karazhan, Khadgar reads the phrase "a 'great gate'" in relation to the portal.[11] However, when he confronts the Kirin Tor he refers to the gate as "the Dark Portal".[2] When Antonidas repeats the term beside Alodi, saying "For you to mention it in the same breath as the dark portal is too much to be mere-", the ancient cubic artifact opens, seemingly awoken or unlocked by the portal's mention.[2] Khadgar's use of the term suggests that the name was mentioned in the stolen tome, while Alodi's response could show a specific familiarity with the name, although the entity was certainly intelligent enough to understand what the term referred to without having previously heard it.