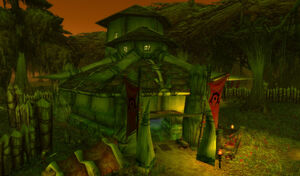 Great halls served as the primary centers for most orcish and Horde settlements during their wars against humans and the Alliance. This has changed, for great halls are now rare and the modern Horde seems to favor large towers or barracks as hub for their towns. The great halls were known to be upgradable into strongholds or fortresses.

This is where the denizens of an encampment came to meet and make their arguments heard. The constant bickering and backstabbing that occurred here was necessary, however, for it kept them from killing each other in the street. The town hall was also where the encampment's Overseer could keep a close eye on the resources and funds that were available, and use them as he saw fit. All shipments of wood and gold were brought here for his inspection. This is also where peons were given the training to do the simple tasks demanded of them by the orcish empire. Blackhand had ordered that only one town hall be allowed to stand in each encampment, so that separate factions of orcs would not arise. If the town hall was destroyed in battle, another could be built to replace it.[1]

While they are not named similarly, the orcish town halls of the First War already looked similar in shape to the great halls of the Second War. For more information, refer to the town hall article.

This structure served many purposes, such as being the gathering place and command center, for most orcish settlements. Unfit for battle, the lowly peons were trained here to perform the menial tasks of construction, repair and harvesting. This was also where vital raw materials were gathered to be processed and then distributed. The great hall was always a source of fevered activity as the laboring peons worked to please their overseers. When settlements achieved greater prosperity and required stronger defenses, the great hall could be reinforced to become a stronghold.[2]

The great hall is the core stronghold of any orc clan. Using this structure, orcs process lumber and gold from mining operations are processed. Raw materials pilfered from enemy camps are added to the war chest. In time, the great hall can also be more heavily fortified.[3]

Tiny Great Halls were also usable during the Third War.

As said above, great halls are now rare and the modern Horde seems to favor large towers or barracks as hub for their towns. Still, some great halls still exist, such as in Boulder Lode Mine, Stonard, Kil'sorrow Fortress, Garrosh's Landing and Gorshak War Camp. The town hall in Frostwall is referred to by Serka as a great hall, indicating that its current name may just be a gameplay convention to keep parity between Alliance and Horde. Warfang Hold in Stormsong Valley has a Great Hall.

It is also notable that the Warspear Keep in Ashran was simply named "Great Hall" during the Warlords of Draenor beta.