For the character from the main universe, see Greatmother Geyah. 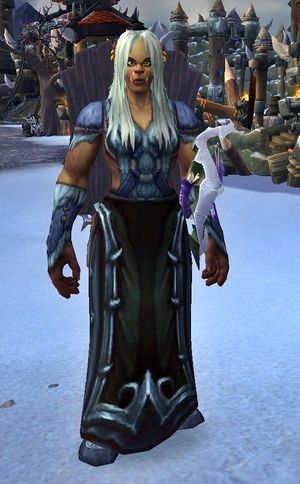 Greatmother Geyah is the mother of Durotan, Ga'nar and Fenris Wolfbrother, located at the Horde outpost of Frostwall in Frostfire Ridge. She was the mate of the former Frostwolf chieftain, Garad.

Geyah is a skilled healer.[1]

Long before the opening of the Dark Portal, Geyah would hunt clefthoof along with the other members of her clan. One time, she was bitten by a drift lurker which caused her to enter a deep sleep. While her middle son, Ga'nar, wanted to leave her, Durotan didn't. After Ga'nar left, Durotan and her companion, Stormfang remained and tended to her for several days. At some point a pack of garn attacked. She awoke only to see Durotan lost in bloodlust. When she spoke to him, he found out he also killed Stormfang. She told him she would rather die than to know that her son had become a beast.[2]

Adventurers of the Horde can choose Greathmother Geyah as a follower after the Battle for Thunder Pass. Deeply moved for the loss of her two sons, she moves to Garrison Frostwall.