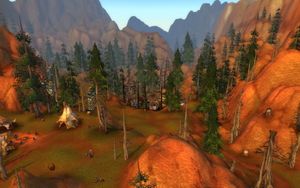 The Greatwood Vale is a forested valley in the foothills of the Stonetalon Mountains. It is accessible via Webwinder Path. The Horde settlement of Malaka'jin is to the south, and the Alliance settlement of Northwatch Expedition Base Camp is to the north.

Linking the dry expanse of the Southern Barrens to the mountains proper, the fertile recesses of the vale have been a hunting and camping region for the tauren tribes for millennia.[citation needed]  Recently, the Grimtotem tribe has attacked and destroyed the tauren loyal to the Horde in the region, burning Camp Aparaje to the ground and murdering most of the inhabitants. Horde agents have been sending adventurers into the vale to assault the Grimtotems there.[citation needed]

In the Stonetalon Mountains, the Alliance entered an alliance of convenience with the tauren of Grimtotem Post. The Alliance was forced to agree to supply the Grimtotem there with weapons in exchange for protection from the Horde and free reign to move freely through their territory. Together, the Grimtotem and the Alliance beat back the Horde and slay four of the Horde's most fearsome generals at the battle for Greatwood Vale.[1]

This vale is one of the primary sources of tauren activity in the Stonetalon Mountains. Two separate tauren villages are found here, the Grimtotem Village and Camp Aparaje. Both are inhabited by the Grimtotem tauren, a tribe of dissidents who do not share Cairne Bloodhoof's ideals of uniting the clans and instead focus on seeking retribution for the wrongs imposed on them in recent history. This approach is not popular enough to gain the support of the more numerous tauren in the Sun Rock Retreat, but nevertheless the Grimtotem tribe has been successful in their initial attempts to "cleanse" the other races from the land.[2]