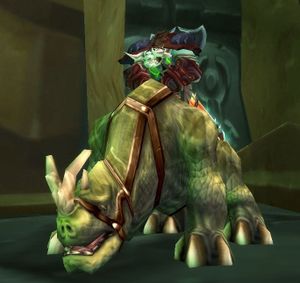 The Green Kodo was a level 60 epic mount once bought in Bloodhoof Village. These were originally available before the armored epic mounts. As many servers were not around before they became unavailable, the people that had gotten the mounts back then had quit, or the original owners traded them in for a regular armored kodo, they are exceptionally rare.

This mount has been replaced by swift mounts after patch 1.4 and is no longer obtainable in the game.

An alpha member of the herd, this kodo is a prime example of the mighty creatures which thunder through Desolace.