Greenrush River is a mighty river that begins in Zul'Aman's Lake Abassi and exits the region in the southwest.[1] It travels through the Eastern Plaguelands and finally empties into Darrowmere.[2] 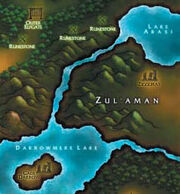 Greenrush River might have been illustrated on a map from Warcraft III.