This article is about the race in general. For the Teldrassil mob, see Grell (mob).

The grell,[1] also pluralized as grells,[2] are forest spirits that resemble imps[1] but are generally larger in size, lack the characteristic horns, and are not demonic. They are actually embodiments of the wild side of nature, and so tame ones are very rare.[3] Brann Bronzebeard believes they may come from Aessina, though when he asked her she simply said, "maybe".[4]

According to Anchorite Avuun, even though grell resemble imps, he has found no demonic traces among the ones he has studied. They are, as far as he can tell, uncorrupted. The misty grell that dwell in the Misty Valley in the Swamp of Sorrows move as one with the wind and can summon gusts of breeze at their whim.[1]

In Teldrassil, the local grell and grellkin became tainted by

In Darkshore, Thundris Windweaver referred to the grell and satyrs inhabiting Bashal'Aran as "demonic minions",[2] and after the Cataclysm, a number of grell could be found serving the satyr Zenn Foulhoof in Cliffspring Hollow.[7] 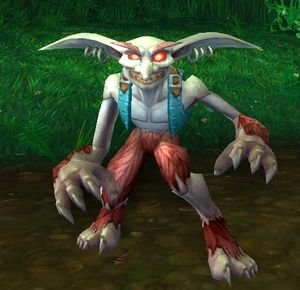 Enderkind, a grell in Val'sharah.

[Grell Moss] is obtained from a rare loot card in the Crown of the Heavens expansion for the World of Warcraft Trading Card Game. 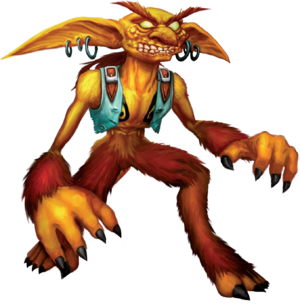 A grell as depicted in the Monster Guide.

This small, skipping creature looks a bit like a thin, gangly, orange goblin. Large ears spread from its bald head. Its pupil-less yellow eyes stare as it raises a clawed paw. Grell are small, playful creatures that can be encountered in wild areas. They are not particularly dangerous individually, but in gangs they can pose a threat to outlying night elf and furbolg communities; they may be small and unimpressive, but their claws are sharp. Scattered groups of them are actively malicious. Some grell wear earrings, which scholars believe may possess magical traits. Grell are fond of hyacinth mushrooms. Combat Grell are not particularly hostile; generally, they are content to leave potential dangers alone. If an opponent attacks, however, they defend themselves fiercely. Grell in a gang feel no particular connection to each other, it seems, and are as likely to assist their comrade as to watch the combat idly. They are categorized as small fey creatures.[8]