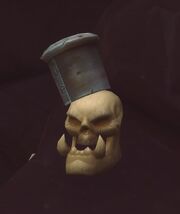 Grenja is a member of the Goldtusk Gang at the Goldtusk Inn in Vol'dun. She is the inn's resident bard, but she exclusively plays drums since she likes smashing things. Back in Zuldazar, she got the gang out of a lot of sticky situations, holding open and knocking down a lot of doors and people alike.[1]

Like most of the other Goldtusks, Grenja initially appears to just be an inanimate skull that Rhan'ka talks to when adventurers arrive at the inn. Her cranium is described as looking surprisingly happy for a skull[1] and like it would potentially make a halfway decent drum.[2] Grenja apparently asks Rhan'ka for a golden drum, but he tells her to stop asking lest he take away her "fancy new hat".[3] When Sandfury trolls attack the inn, Grenja's skull is kidnapped and taken to the Sandfury Hideout (where, appropriately, it sits next to a large drum) until Rhan'ka sends adventurers to get her back.[4] After adventurers are initiated into the Goldtusk Gang, they gain the ability to see the ghosts of the gang members.[5] Grenja's ghost is seen trying to repair a drum in the east corner of the inn.