Complete Greymane's mission aboard the Skyfire.

The Skyfire is prepared to make way to Stormheim. Should we become engaged, I will require my best fighters on the front line. This includes you, <class>.

You will also receive: 30

It seems you were spared the brunt of the explosion. If only Greymane were so lucky...

On your feet! We had better get a move on before the Forsaken are on top of us! 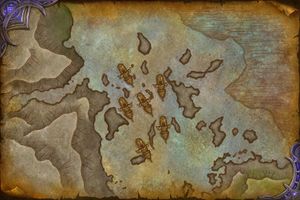 As the scenario begins, a cinematic of the Skyfire unloading a volley on the Forsaken fleet from above the clouds plays. After the scenario:

Head down to the main deck and hop in one of the Skyfire Deck Guns.

Use the Deck Guns to shoot down Forsaken Dreadwings

The guns have two abilities:

Forsaken Dreadwing bats start appearing. A single Flak Blast will one-shot them. On a timer (roughly once a minute), the deck guns will get frozen.

Kill the Icebound Dreadnought to thaw the guns, then get back to shooting.

Stage 3: Justice from Above

Head below decks and use a Skyfire Parachute to board the Forsaken ships and defeat their captains.

Head below deck and follow the arrows. Marines will chime in:

There are four Skyfire Parachutes on the rear deck, near some 7th Legion Paratroopers. Grab one to jump off and land on the poopdeck of The Banshee's Wail.

Same as before, this time with Black Rose Apothecaries and Cauldronmaster Mills.

Same as the last two, but this time with two elite Royal Dreadguards and Dread-Captain Tattersail. Get her to below 20% health to start the next stage.

Stage 4: Bats in the Bomb Bay

Crowley drops the player off at the rear deck balcony. Head in and start killing Forsaken Bat-Riders, Forsaken Dreadwings and Forsaken Deathstalkers, and interacting with Volatile Flares. Fill up the bar, but it's a lost cause...

Genn Greymane yells: Monsters! You have no place in this world!
Nathanos Blightcaller says: You call us monsters? How rich.

At 10% health, a cutscene takes place, ending the fight.

The Skyfire flies away in flames, shaking from explosions.

On the other side of the cutscene, the player wakes up in the Skyfire Triage Camp.