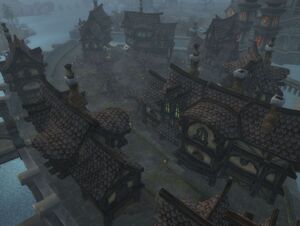 An overview of the Greymane Court.

The Greymane Court is the southwestern section of Gilneas City. It mostly features housing, and it connects to the Military District to the east, and the Cathedral Quarter to the north. When worgen overrun the city, the evacuees head to Duskhaven from here. During

[11] The Battle for Gilneas City, the battle with Sylvanas Windrunner takes place here. A secret tunnel known as the Undertaker's Pass connects a house here with Aderic's Repose on the other side of the Northgate River.

It is interesting to note that unlike the majority of Gilneas City, Greymane Court is the only district that is not ruined, rather it is in extremely good shape. Even so, it was the first court to fall to the hands of worgen and Alpha Prime.[1]