The Greymane Wall as it appears in the official trailer of Cataclysm.

The wall seen from Gilneas.

The Greymane Wall was erected before the Third War by order of King Genn Greymane, as the kingdom of Gilneas isolated itself from the Alliance and the rest of the world due to a disagreement surrounding the internment camps for the orcs, and other disputes. It is a colossal wall with a substantially sized gate, located at the southern edge of the Silverpine Forest in Lordaeron (its entrance near Pyrewood Village) and the northern edge of the Gilnean peninsula.

The controversial edifice sowed civil discord in Gilneas, eventually leading to the Northgate Rebellion, a devastating civil war that nearly destroyed the nation. Though King Greymane was able to put down the dissenters with the apprehension of the rebellion's leader, Darius Crowley, the kingdom began to experience other troubles, in the form of the Scourge invasion. Though the wall protected the Gilneans from the Plague, the worgen curse instead took effect there. During the war across the continent, many refugees that escaped the Plague made camp outside of the wall, but its gates remained closed for years, and the refugees perished at some point. It was not until the Cataclysm that the gates were destroyed, giving the chance to the Forsaken to invade the peninsula from the north.

Following the defeat of the Old Horde at the end of the Second War, the orcs that remained behind after the Dark Portal closed found themselves prisoners. While some wanted to execute them outright, Terenas Menethil showed them mercy and began building internment camps for them. This bill, however, coupled with the expenses that led to rebuilding Stormwind, led to disagreements between the kings. This ultimate decision would see the Alliance of Lordaeron itself crumble as leaders such as Genn Greymane, decided to leave the union[1] after Thrall liberated the orcs from internment camps, proving Lordaeron's incompetence.

With the money invested in building the camps being wasted, Gilneas cut off all military pacts with the Alliance. In order to stop the Horde or any other enemies from threatening his kingdom ever again,[2] he decided to leave the world behind. Greymane built a wall which split his kingdom off from the rest. Judging the landscape, the wall would have to be built with some land being cut off. With Vincent Godfrey at his side, they agreed to cut off Crowley's lands located at Silverpine Forest, which led to the unfortunate civil war.[3]

In Curse of the Worgen.

Despite being victorious, Genn had other worries on his mind. The Scourging of Lordaeron had devastated Gilneas' neighbors and not long after, the Undead Scourge were outside the wall, while Gilnean soldiers slowly dwindled. To combat this, he ordered Archmage Arugal to summon the worgen. At first, everything went according to plan until the Scourge were driven off. With no more enemies left to fight, the beasts turned on the Gilnean soldiers stationed beyond the Greymane Wall, spreading the worgen curse to his kingdom, gradually eating away at Gilneas' humanity.[4][5]

Haggard and sickly refugees from the rest of Lordaeron were stopped from going into Gilneas due to the wall. Dalin Forgewright had dedicated himself to the care of the refugees, and Valdred Moray was trying to flee into Gilneas after murdering Deliah Andrean. Wallace the Blind was also there, as well as Stewvul who was hiding in a crate. 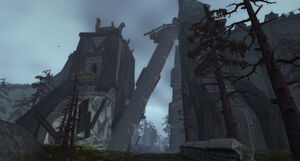 To compound the worgen threat, the Forsaken started battering at the nation's gates in a bid to conquer Gilneas, but the Gilnean troops defending it coupled with the wall's mighty defenses were easily driving the Forsaken back despite all their efforts and daring attacks. Although the Gilneans' defenses held, the Greymane Wall began to deteriorate.[6] The gates of the Greymane Wall were eventually shattered by the Cataclysm, finally revealing what had happened to the kingdom and its citizens, and allowing the Forsaken war machine to invade the once mighty nation. With the worgen curse taken hold, the Gilneans found a partial cure, allowing them to retain their human minds even when transformed, and allowing them to transform at will.[5] As the Forsaken invaded the land, the worgen Ralaar Fangfire, the Alpha Prime, also infiltrated the land by using tunnels hidden underneath the Greymane Wall. Allying with the undead, he wanted to get the Scythe of Elune.[7]

Some time after the Gilneans evacuated from Gilneas and joined the Alliance, Darius Crowley led a counterattack against the Forsaken in Gilneas and Silverpine Forest. The worgen managed to push the undead out of Gilneas. The Gilneas Liberation Front and 7th Legion made camps just beneath the shadow of the Wall: Gilneas Liberation Front Base Camp and 7th Legion Base Camp. The Forsaken, however, managed to capture Lorna Crowley. Sylvanas Windrunner used her to bargain a surrender with Darius Crowley in front of the Wall's gate. After Darius and Lorna retreated back to Gilneas, Sylvanas was then killed by Vincent Godfrey but was soon resurrected by her loyal Val'kyr. After that, battles in the area ceased.[8]

Greymane Wall is the only evident site in Gilneas. Genn Greymane and his people constructed the wall after the Second War to isolate themselves. This enormous gray wall marks the boundary between Gilneas and the rest of Lordaeron. No guards stand at its battlements or man its gates — the wall seems dead. Nevertheless, refugees from the north camp in the wall's shadow, hope for succor. These unfortunates never see any Gilnean and are easy prey for the worgen that occasionally stray this far south from Shadowfang Keep. Some refugees were sent to Hillsbrad by Brann Bronzebeard when he passed near the wall.[9][10]

The massive gate at the wall is probably named "the Northgate", as the areas south of the wall are named Northgate Woods and Northgate River, including the rebellion that was against the construction of the wall. The broken area of the gate was also known as "Northgate Breach"[citation needed]  at some point.