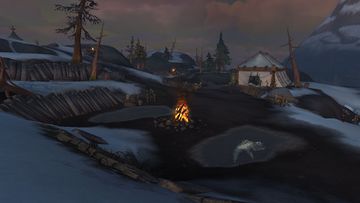 Greystone Relief is an encampment located just outside the walls of Greystone Keep in the far east of Tiragarde Sound. The camp was set up by the survivors of a mutiny within the nearby keep, and these loyalists continue to seek to defeat the traitors in the name of House Proudmoore.

Following a coup in Greystone Keep while its commanding officer Tallis Skyheart was absent on patrol, mutineers seized control of the fortress and killed or expelled all forces loyal to House Proudmoore. Those who escaped Greystone chose not to flee, and instead established Greystone Relief to continue the battle. Over time, the situation in the camp worsened, as the survivors remained too few to take back the keep and found themselves also beset by local saurolisks. With the aid of an emissary of the Alliance, the forces at Greystone Relief began to push back.

Many of the wounded in the area were recovered and treated,[1] while the number of saurolisks were thinned to reduce the threat.[2] An offensive against the mutineers also succeeded in killing their leader Fernn and his lieutenants,[3] while also decimating the keep's defenders.