Not to be confused with Drifta.

Griftah is a phony amulet vendor located in the Lower City of Shattrath, along with other appearances at Darkmoon Island, Kun-Lai Summit, and Zuldazar.

He persistently announces his silly wares, such as

[Soap on a Rope] and other white neck slot items, all of which are quite useless, either granting abilities you already have (such as jumping, swimming, or returning to your body upon death) or effects you do not need (such as protection from critters or from "Tikbalangs", which aren't actually in the game). 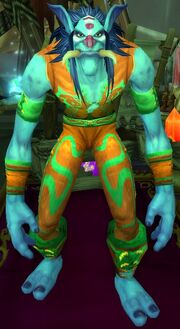 Griftah was initially located in the Lower City market section of Shattrath City, trying to sell his wares to unsuspecting bypassers.

Early on he was standing next to Peacekeeper Jadaar who often contradicted and questioned Griftah's claims about his wares, leading to amusing conversations, but for a short time Griftah was exiled from the city due to the endless reports of his shady business practices. He continued to sell his questionable goods outside of Shattrath, at the city's south-western entrance from Terokkar Forest, asking players who pass by about the state of his stall. Peacekeeper Jadaar was standing guard outside Griftah's stall, while the troll's inventory was examined by Investigator Asric. However, when Zul'Aman was re-discovered, Griftah was let back into Shattrath selling his old goods, and sells a

Griftah now has another chance to find customers during the Darkmoon Faire. He can be spotted near the boardwalk by a wagon.

Griftah found his way to Pandaria and can be found at the Grummle Bazaar in Kun-Lai Summit.[64, 61]

He offers the original items he sells in Shattrath, plus the

Griftah traveled on to Draenor, where he managed to sell some of his more useless junk to garrison troops in Talador. There is a standing order to rough him up a bit in order to get a refund back.[1]

Rogues can summon him through

[Secretive Whistle] and do

Griftah is found in the Hall of Shadows and later also at Deliverance Point on the Broken Shore. 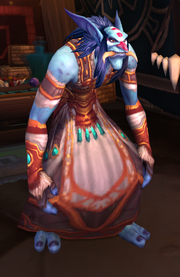 Somehow Griftah has made it across the veil to the Shadowlands, where he has set up in the Broker's Den of Oribos. 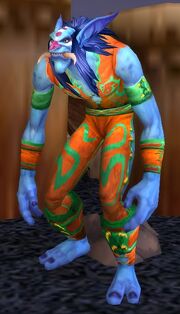 The subject of this section was removed from World of Warcraft in patch 4.1.0.

In patch 2.2, Griftah was exiled from Shattrath City as a result of fraudulent activities.

The reactions of the players were varied, with some happy with the change while others were disgusted of what they think was Blizzard taking this action due the complaints by players who had got "grifted" (and perhaps because they would lose the opportunity of visiting his stall to hear his funny conversations with Peacekeeper Jadaar).

However, his creator, World Designer Kisirani, answer the following to one of these claims:[1]

I can say with the utmost confidence that you are incorrect. There is no ret-con occurring here, and the changes to Griftah were not done as a result of player or GM complaints. I assure you, had that been the case, his amulets would likely have been removed entirely rather than merely relocating the NPC.
They were done in the interest of making the world a bit more interesting, and from the vast majority of responses, it appears that motivation is a success.
Wait and see. :)

It's a shame you're unwilling to believe what is, in essence, the truth—that Griftah has been a small foray in progressive content as we gauge certain things.
I'm the person behind making the content. I've no reason to deceive you.
It's one of the goals of my job, at the heart of it, to make the world feel more alive. The larger parts of it primarily contain holiday content and world flavor; this was a small bit of the latter.

Griftah was seen in Shattrath City again in patch 2.3.0.

Check Peacekeeper Jadaar for some of his conversations with him.

During his exile from Shattrath

Now, I know what ya be thinkin'. Ol' Griftah's in a spot of trouble. This be nothin'. I still got a lotta my stock on me, so c'mere and check out what I got.

Ahaha, ya see this? Griftah's BACK! Back in my stall, back with my old wares, and ready to pass on the deals to ya!

Want to be better, stronger, faster? Each one of these amulets be guaranteed to do just what I say they be doin'. Step up and buy one of these miraculous baubles! Cheap at twice the price!

Griftah be back again! New stall, and brand new wares, and ready to pass on the deals to ya!

These miraculous baubles be cheap at tripple the price!

I be branchin' out, mon. All sorts of things available in. So much opportunity.

Show me your goods!

Gossip
Ol' Griftah ain't never seen a place like dis before!
<Griftah waves a hand at you, leaning in to whisper.>
Shh! Keep it down!
Dese brokers be offerin' all kinda tings for us "mortals," and I be tryin' ta find out just what dose tings be.
Maybe ol' Griftah be findin' some new amulets ta sell, eh? Heh.