Grim Batol is a mountain fortress located in the western Twilight Highlands (formerly in the eastern Wetlands). It has great walls and spires that reach toward a steel-gray sky, but the stronghold's bulk is underground. It was founded by Wildhammer dwarves and later seized by orcs as a prison for Alexstrasza, but during the Cataclysm this place is once more a war area with the Twilight's Hammer cult using it as a military base.

After losing the civil war between the Bronzebeards, the Dark Irons and his own clan, Thane Khardros of the Wildhammer clan led his people north through the barrier gates of Dun Algaz, and founded their own kingdom within the mountain of Grim Batol.

Following years of bitterness after the war, Sorcerer-Thane Thaurissan of the Dark Irons launched a two-sided attack against the other dwarven clans from his city of Thaurissan in the Redridge Mountains. The Thane led his own forces against the Bronzebeard capital Ironforge, while his sorceress wife, Modgud, led forces against the Wildhammer's Grim Batol, in hopes they could wrest the entirety of Khaz Modan.

Thaurissan's forces battled deep into Ironforge, but eventually the Bronzebeard dwarves successfully forced them from the city.[1] While his forces retreated to Redridge, Modgud's war golems were breaking through the gates of Grim Batol. She used the powers of her blade, Xal'atath, to call upon the shadows from the earth to attack the dwarves in their own fortress. The Wildhammers fought back viciously against the assaulting Dark Iron forces and living shadows. Thane Khardros rallied his remaining warriors to push through the invading onslaught "with the single-minded focus of a war golem, only coming to a stop when he found Modgud". Her blade was inexplicably absent when she reached for it, and Khardros struck her down with one mighty blow from his hammer.[2]

The Wildhammers chased the retreating Dark Iron forces out of the city, and the few who had retreated deeper were later twisted into the skardyn by Xal'atath's curse. Leaderless, the remaining Dark Irons on the surface began a hasty retreat to Redridge only to be intercepted by the Ironforge armies headed to assist Grim Batol. Modgud's remaining forces were crushed between the Wildhammer and Bronzebeard armies, who then turned south towards the Redridge Mountains to finish off Thaurissan's remaining forces.

Following the Sorcerer-Thane's quick and unintentional self-destruction in summoning Ragnaros the Fire Lord, the Wildhammer dwarves returned to their home of Grim Batol. But they found that Modgud's death had left an evil taint in their fortress, and Grim Batol was uninhabitable. Ironforge offered them a home, but the Wildhammers refused, the majority of them turning north to settle in the Hinterlands, where they founded their new capital of Aerie Peak, while the rest settled in the region of Northeron, not far from their cursed former home.[1][3]

During the Second War, Grim Batol became the primary base of the Horde refining operations in Khaz Modan. The refineries were protected by the Bleeding Hollow clan,[4] and after a personal inspection Cho'gall declared that they were well maintained and fulfilling their quotas.[5][6]

The mountain fortress itself was the domain of the Dragonmaw clan.[7]

Grim Batol was also the main base of the Horde's dragon breeding program, where Alexstrasza, the red Dragon Aspect, was kept captive and forced to produce red dragons to be used as mounts for orc dragonriders. The Horde used the Demon Soul and Dark Iron chains to control the red brood. Grim Batol remained in orc hands long after the collapse of the Horde and the destruction of the Dark Portal, largely due to the power of their dragons. Eventually, thanks to the efforts of Bronzebeard fighters and a band of unlikely heroes led by the mage Rhonin, Alexstrasza was freed. The dragon queen immediately set about incinerating every orc she could find, utterly destroying the power of the Dragonmaw clan (in Azeroth) and killing her former captor Nekros Skullcrusher.[8]

The mountaintop fortress of Grim Batol.

Following the Battle of Grim Batol, most assumed that the fortress' evil legacy had been eradicated. However, the dwarves sensed that a darkness still permeated the mountain and so left shortly after the orcs' defeat. Alexstrasza and her consort Korialstrasz decided that it was the red dragonflight's duty to seal off Grim Batol and sent red dragonkin forces to stand guard around the mountain and prevent anyone from entering.[9]

In World of Warcraft, Grim Batol was initially a subzone in the southeastern Wetlands. The fortress itself was inaccessible, consisting solely of a mountain road leading to a massive, closed door. The surrounding area was populated by various elite level 60+ red dragonkin and Axtroz, a mighty red drake.

. It was inadvisable to try to enter from southeast Wetlands near its position on the map; one must take the north entrance, as there is a cliff wall.

The ruins of the orc caravan that tried to escape the fortress can still be seen strewn around the entrance and along the road outside of the Dragonmaw Gates.

Please add any available information to this section.
Around the time of the war against the Lich King, corruption seeping from Grim Batol caused some of the red dragonkin forces to fall ill, with some even dying or going so mad that they had to be put down by their kin. The red flight finally did as all others had before them and abandoned the fortress.[9] The taint from the cursed mountain gradually spread into the Wetlands, corrupting some of the wildlife.[10]

Unbeknownst to the outside world, Sinestra, Deathwing's consort, moved into the citadel shortly after the red dragons left and used the tunnels to conduct experiments on dragon eggs she had collected over the centuries,[11] leading to the creation of the twilight dragonflight. Korialstrasz sensed something happening within the mountain and discovered Sinestra's efforts. Ultimately, thanks to Korialstrasz' allies, the sacrifice of the nether dragon Zzeraku, and the anger felt by Dargonax towards his "mother", Sinestra and her creation were defeated. However, Deathwing later continued his fallen consort's work.

The arrival of the Twilight's Hammer, a sinister cult who worshiped Azeroth's malefic Old Gods, seduced by Deathwing's thirst for absolute domination over Azeroth, has claimed the Twilight Highlands as its base of operations. The black dragonflight has driven off the agents of the red dragonflight who guarded Grim Batol (now at [19, 54]

) so that it may be used as a fortress for training Deathwing's minions. The halls of Grim Batol run so deep into the highlands that it is unknown to what twisted end the Twilight's Hammer is using this doomed dwarven marvel.

The red dragonflight joined forces with the Alliance forces for a unified attack on the ancient stronghold and ripped it free from the clutches of the Twilight's Hammer.[12] The army within was led by General Umbriss.

Grim Batol is now considered part of the new the Twilight Highlands zone and features as a 5-man dungeon, Grim Batol.[13]

After the defeat of the Twilight's Hammer, Grim Batol was yet again abandoned. After the Siege of Orgrimmar, Warlord Zaela led her Dragonmaw clan to the fortress to use it as a base of operations, with the warlord herself operating out of the room where Alexstrasza was tortured. After she succeeded in helping Garrosh Hellscream escape his trial at the Temple of the White Tiger, Zaela, Shokia, Harrowmeiser, and Thalen Songweaver briefly returned to the fortress.[14]

By the time of the Fourth War, it was rumored that the twilight dragonflight still existed within Grim Batol.[15] This was confirmed when the red dragon Eryna revealed that the stone troggs in the mountain had kept digging—far deeper and further than even the red dragonflight thought possible—and unearthed thousands of hidden twilight dragon eggs.[16] Eryna later noticed more and more members of the twilight flight coming and going from the citadel and concluded that the flight was mobilizing at someone's command.[17] Ultimately, the dragon Vexiona led the twilight dragonflight in swarming the nearby Wyrms' Bend and Dragonmaw Pass and launching an attack on the Vermillion Redoubt. Alexstrasza, Kalecgos, and an adventurer repelled the attack and defeated Vexiona near the entrance to Grim Batol, forcing her to retreat.[18] 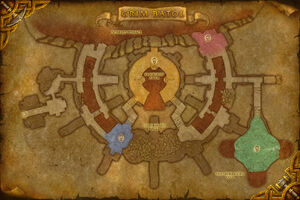 Before the Cataclysm, the following red dragonkin could be found around Grim Batol's entrance:

Members of the red dragonflight were left behind to keep watch over and command Grim Batol, and for years they successfully guarded its desolate halls from further intrusion, citing that they were "guarding a secret that living creatures are not meant to know." The red wyrm Garshilan leads the fortress' defenses, aided by the young Acridistrasz and the dragonspawn Baleflame.[19] A flight of red dragons now commands Grim Batol. The dragons guard a secret power within the fortress and let no one near.[20]

Alexstrasza the Life-Binder herself was involved with Grim Batol, making her too busy to do things such as work on rejuvenating the Sunwell.[21]

In the canceled Warcraft Adventures, Grim Batol was a ruined Old Horde base from the Second War which still contained an Altar of Storms, a Temple of the Damned, as well as a stronghold, fortress and barracks. Thrall had to learn some dark magics inside the Temple of the Damned and the Altar of Storms was used as a meeting points for the scattered clans of the Horde.

It was said to be in the Badlands of Khaz Modan. Next to the base was a foul swamp populated by phosphorescent eels, vultures and tentacle beasts.