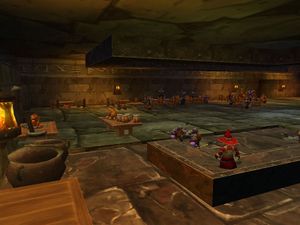 The Grim Guzzler is located deep inside Blackrock Depths. It is part of Shadowforge City, and lies just beyond the Manufactory and before the Chamber of Enchantment.

The tavern is a large two-level area filled with mostly inebriated patrons. These patrons should remain neutral to adventurers unless they are aggravated.

There are also several named NPCs in the Grim Guzzler:

Brewfest Spy was a dwarf present only during Brewfest holiday.

At the rear of the upper level of the bar there is a door that leads to other parts of the Blackrock Depths. Plugger Spazzring holds the

Another way to get wiped by all those mobs is stealing an ale or some food. This will cause Plugger to discover you and turn the patrons on the room hostile to you.

However there are at least two other ways to get this door open more or less safely, but the ability to unlock the last one is unavailable to newer players.