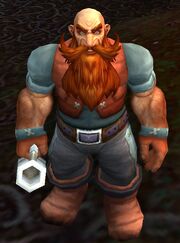 Grimbooze Thunderbrew is a dwarf located in the Dagger Hills in the human territory of Westfall. A jovial brewer, he liked to give clues to his original quests by speaking in rhymes. He later joined Hemet Nesingwary's expedition to Sholazar Basin in Northrend, in search of a new brew.

Years ago, Grimbooze was the owner of the family's Thunderbrew Distillery in Kharanos, when who should walk in but Chen Stormstout, wanting to sample Grimbooze's finest recipe. The two drank many cups of each others' beer, draining many a Thunderbrew keg and Chen's magic Jug of a Thousand Cups, and both declared the other one better. To decide once and for all, they held a large brew taste-testing contest in Dun Morogh that became the origin of Brewfest.

When Chen traveled onward, he left behind his Jug of a Thousand Cups with Grimbooze. In the personal opinion of his grandson Daran Thunderbrew, Grimbooze enjoyed the use of the Jug a bit too much, as it caused his move to Westfall and the reason he spoke only in rhymes. He, in turn, left the Jug behind at home and Daran eventually came in possession of it. When Li Li Stormstout came to see him at Brewfest, Daran passed the Jug on to her saying that not only should the Jug stay in the Stormstout family, but that he didn't want to risk ending up like Grimbooze.[1]

Brewfest now holds appeal among all the races of Azeroth and beyond, serving as a celebration of both Azerothian and Draenic brew culture. Grimbooze's son Ragnar co-hosts the tapping of the keg with Maeve Barleybrew, but while giving their speech, claimed that it was his father that founded the festival, without mentioning Chen at all.

Adventure from lands far and near
Meeting with folks both odd and queer
But if of me a question you ask
You must first complete a simple task!