Grimrail Depot is a dungeon introduced in Warlords of Draenor, set in Gorgrond.

The Grimrail Depot is a vital hub in the Iron Horde war machine, allowing for the transport of troops and materiel produced in the Blackrock Foundry to the front lines of the war being waged across Draenor. The Depot's namesake is the Grimrail itself, a massive train that can bear entire battalions of troops and artillery. On this day, the Grimrail has been fitted with a massive railgun powerful enough to shatter the shield protecting Shattrath, and is about to depart... 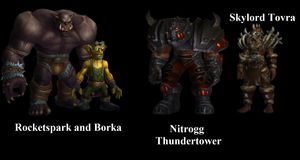