In Grimtotem Spying, you are sent to locate three secret notes at the Grimtotem village, Darkcloud Pinnacle.

To Get This Quest

Go to Freewind Post in Thousand Needles and talk to Cliffwatcher Longhorn.

Quests in this Area

Other quests you may want to do along with this one, since they also take place in Darkcloud Pinnacle:

Locate and retrieve the three Secret Notes in Darkcloud Pinnacle. 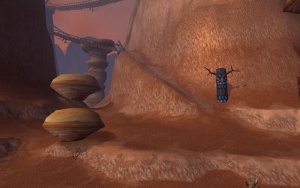 View of the entrance to Darkcloud Pinnacle, as seen from the road and facing east

The notes are located in chests found on Darkcloud Pinnacle in Thousand Needles. To get to Darkcloud Pinnacle, head south down the road from The Great Lift to where it splits. Turn left and walk a few paces, looking to your left. You should see a large blue totem and a path leading up. Follow the path up to reach Darkcloud Pinnacle. The coordinates for the beginning of the path are 31:36.

Once you have reached the top, you must find the three chests. Two are on separate rocks which can only be reached by bridges from the main village rock. The other one is in the main village, in the biggest building. Coordinates are:

Turn this quest back in to Cliffwatcher Longhorn at Freewind Post in Thousand Needles once you have all 3 notes.

<name>, you have served us well in the past, so I now entrust to you an important mission. The Grimtotem Clan is up to something secretive. Three agents of unknown origin were seen visiting the Grimtotem over the recent weeks. We discovered that separate chests in Darkcloud Pinnacle hold these guarded messages.

<name>, if you succeed in this dangerous mission, I will reward you in kind.

Have you discovered what the Grimtotem are up to?

Great Spirit Totem! This is dire news indeed. I must begin to plan for whatever may come.

<name>, as promised, here is your reward for your brave service.