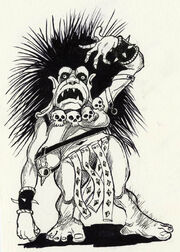 What is probably art for Griselda Blackhand, later labeled as an early troll

Griselda Blackhand was the wretched orc lover of Turok and also the daughter of Blackhand the Destroyer.

At her father's urging, Griselda was one of the first children to be aged to adulthood by the Drain Life ritual with Rend Blackhand and Maim Blackhand.[2] Like her brothers, Griselda had been trained to fight, but she was not a natural the way her brothers were.[3] Blackhand forbade her to drink the blood of Mannoroth, intending to shame her.[4]

Some time later, she started an affair with the renegade ogre Turok in defiance. Blackhand was not pleased.[5]