Grizzek Fizzwrench is a goblin engineer living in Tanaris. He is bald and originally had yellow-green skin but the hot sun has turned it into forest-emerald hue. He has a robotic parrot named Feathers.

Grizzek was previously married to Sapphronetta "Saffy" Flivvers when he was young. They were lab partners that were stupid enough to fall in love with each other. After the first month, their relationship began to fall apart because everything one of them did seemed to irritate the other. After Saffy divorced Grizzek, she joined the Explorer's League.[1] Although Saffy claimed that the robotic parrot Feathers was hers, they in fact made it together as a first (and last) anniversary gift to each other[2] and Grizzek had cherished it ever since.

Grizzek was originally a part of the Bilgewater Cartel living on Kezan. Once the isle exploded, he and the cartel moved to Azshara. He didn't like the land, the idea of reshaping it into the Horde emblem, the idea of joining the Horde, or the Horde races, or the high position Jastor Gallywix obtained by becoming a leader of a Horde faction. One day, he just decided to leave Azshara. He took his belongings, except his inventions that were left with Jastor, and moved to a deserted beach in Tanaris where he constructed a small domicile and laboratory. Over the next years, he built a defense system using various robots and warning devices. He enjoyed his freedom and daily routines until Jastor Gallywix paid him a visit after the end of the Argus Campaign.[3]

Grizzek agreed to invent Azerite products for Gallywix but stipulated he be allowed freedom to dictate how he worked, what he made, how it was used, and also the assistance of his former lab partner Sapphronetta. Gallywix reluctantly agreed to Grizzek's demands but to ensure Grizzek's compliance, he also stationed his bruisers and Druz to supervise him while he worked.

Saffy was kidnapped and taken to Grizzek's lab, although Grizzek reproached her kidnappers for treating her roughly. Although Saffy was disdainful to Grizzek, Grizzek was happy to see her. Saffy was against anything to do with him until Grizzek put a piece of Azerite into her palm and its effects opened her mind to the possibilities the two could do with it.[2]

As the weeks went by, Saffy and Grizzek worked on making new Azerite inventions for Gallywix, such as armor and building material. As the two worked together, they began to rekindle their relationship. Eventually, they were notified that they were now ordered to create only weapons.[1]

The couple was devastated by this news as they did not want to create things that caused harm unto others. They created a plan where they would set up a bomb in their lab and secretly escape through a tunnel that opened up in a random part of Tanaris. They also programmed Feathers to fly to Teldrassil with a warning of what had happened and a plea for rescue, with the duo intending to offer their discoveries to the Alliance on the stipulation that they would only create things that could help, not harm. Prior to leaving, Grizzek proposed once more to Sapphronetta, offering her an Azerite ring, and she accepted. While traveling through the tunnel, they talked openly about their feelings for each other. When the duo exited the tunnel, however, they were captured and tied up back-to-back by Druz, Kezzig, and their goons, who had also taken their notes. Druz informed them that they knew of their plan ahead of time and had taken all their inventions, as well as disarmed Grizzek's bomb in the lab and shot Feathers out of the sky. Kezzig then placed a bomb between the gnome and goblin and left with Druz and the goons.

The newly engaged couple were able to get the bomb to fall to the ground between them, but when they attempted to flee, their short, tied up legs could only get them so far. As they continued to waddle their way to safety, Grizzek lamented that Gallywix would exploit their work to hurt others after all. Saffy, however, confessed that he wouldn't since she had already destroyed their notes, leaving Gallywix unable to recreate their experiments and with access to only a few prototypes and mixed potions. At that moment, Grizzek slipped on a stone and broke his ankle, forcing him and Saffy to crawl. However, the gnome then realized that she was still wearing the Azerite ring, which would possibly be enough to protect them from the explosion. As Grizzek was in the process of saying "I love you" to Sapphronetta, the bomb went off.[4]

The two survived the explosion and made their way to Kul Tiras. During a Horde incursion into Tiragarde Sound they could be found in hiding at Greystone Keep, and provided the Grizzek's Rocket Hop to aid an Alliance adventurer in fighting the Horde off.[5] 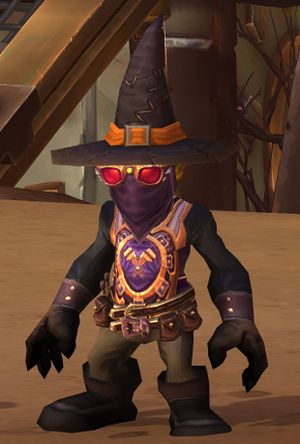 Grizzek in disguise on Mechagon Island.

Later, the adventurer enlists Sapphronetta's aid in the mission to Mechagon. She agrees, so long as Grizzek - who is living with her in Boralus - is allowed to come as well.[8] Later, if Sapphronetta is spoken to in Rustbolt on the subject of goblin technology, she flashes the Azerite engagement ring that Grizzek gave her in Tanaris. Grizzek covers himself from head to toe to hide his goblin identity from the gnomes on their expedition team, though once they and the goblin team led by Gazlowe are welcomed to Rustbolt by Prince Erazmin, he was apparently comfortable enough to not wear the disguise.

You came over with Gazlowe, right?

He's agreed to "forget" that me and Saffy were out here when Gallywix checks in on him.

I know we can trust you to do the same.