Not to be confused with Grizzlemaw (wolf).

Grizzlemaw is a furbolg city located in the center of the Grizzly Hills of Northrend, built within the stump of the failed World Tree Vordrassil.[1]

The furbolgs of Grizzlemaw are all hostile, and are around level 73 - 80. They are part of the Redfang and Frostpaw tribes, which are constantly at war. Killing furbolgs from one side can make you temporarily neutral with the other for five minutes (unless you kill more of the opposition, in which case you may remain so as long as you're nearby). 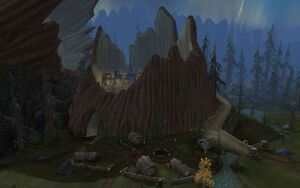 4,500 years before the First War, Fandral Staghelm took branches from the World Tree Nordrassil and planted them over saronite that had begun to appear across the world. The largest tree grew over a particularly large saronite deposit in the Grizzly Hills; Fandral and his druids named it Andrassil. Without the blessings of the Aspects however, it was vulnerable to the Old Gods' corruption and after finding out the roots of the tree had reached the prison of Yogg-Saron, the ancient druids were forced to destroy the tree, which they renamed Vordrassil.

The stump that was left behind was eventually taken over by the furbolg tribes, who built the settlement that became Grizzlemaw. The tree's roots which had pierced the prison of an Old God, led to the eventual corruption of the furbolgs. 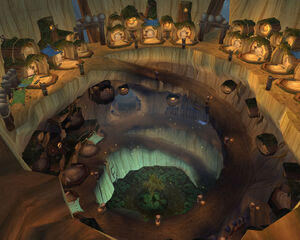 A corruptive darkness resides in the depths of the tree remains, which has also spread to the furbolgs in Grizzlemaw itself, and it is here the Alliance and the Horde began their investigation into what went wrong. Hierophant Thayreen and Windseer Grayhorn sent Alliance and Horde adventurers, respectively, to collect samples of the oozes growing in the three segments of the tree, as well as determining the source of the darkness within them. It was then discovered that the furbolg tribes had managed to resurrect the great bear Ancient Ursoc, killed during the War of the Ancients ten thousand years earlier; however, Ursoc's children, Orsonn and Kodian, recognized that their father had been corrupted in the same manner as the furbolgs who restored him, as their blood was tainted with the same darkness found in the oozes around Vordrassil's shattered remnants.[2]

The trail thus led into Grizzlemaw itself, where the furbolg were using seeds left over from Vordrassil's destruction to regrow the tree within the great stump. The adventurers were tasked with burning the sapling growing within its depths and collecting the ashes, as well as collecting Vordrassil's seeds to prevent the furbolgs from regrowing it again.[3][4] Once the ashes were purified, they journeyed to Ursoc's Den to confront the corrupted Ancient. After defeating him and sprinkling Vordrassil's ashes on his corpse, the freed spirit of Ursoc appeared and revealed the influence of the Old God Yogg-Saron, warning that his influence stretched beyond Vordrassil's roots.[5]

A druid adventurer seeking to receive the Claws of Ursoc called Ursoc's brother, Ursol, to Grizzlemaw to face a gauntlet and prove themselves.

Grizzly Hills is the furbolg homeland and they outnumber every other race here combined. They have a city here, Grizzlemaw, but it holds less than half their number. The rest are gathered in clans and scattered throughout the region.[6] By some accounts, Grizzlemaw is the center of furbolg civilization and the seat of their culture.[7] The city is ruled by Baergar Blackpaw.[8]

The furbolgs of Grizzlemaw have fought the Drakkari for many years, and they can tell you some interesting things of their culture. Rurson and Gorroc are two furbolgs living in this city who know a bit of Drakkari history.[9]

It is a big, rough-hewn place, with a tall wooden palisade surrounding massive stone and wood houses. Guard towers mark the four corners, and smaller ones flank the double doors in front.[8] Furbolgs are simple and uncomplicated, and so is their home. Furs cover the floors and furniture, which is large and comfortable, and woven tapestries lend some color to the walls. Weapons and other trophies are mounted above doors and windows, which have thin sheets of skin to keep out the cold. Large fire pits stand at the center of every house, and some large rooms have their own smaller pits down the middle.[8]

Furbolgs are nomadic, following caribou and other prey through established territories; so they don't have many fixed structures, just central lodges in the centers of their hunting grounds. Grizzlemaw is the exception. A few stories claim the city was built on the site of the Frost Paw tribe's lodge and made large enough to accommodate several tribes at once. The Frost Paw then invited other friendly tribes to shelter the winter with them. The resulting ties changed the furbolgs from scattered hunters to a stronger, more unified race, and the Grizzly Hills from ancestral hunting grounds to a loosely defined nation.[10][8]

Some stories say that the Drakkari built Drak'Tharon Keep before the furbolgs built Grizzlemaw. Supposedly, the Frost Paws gathered the tribes together in part to fend off the new Drakkari threat. Both races were in the Grizzly Hills and hated each other — the furbolgs had the numbers but with their new keep the Drakkari were more organized, and the trolls were always more unified than the furbolgs. The existence of Grizzlemaw affected the balance, and the furbolgs' victory over the Drakkari in a series of skirmishes may have led to the keep's eventual loss of Drak'Tharon to the Scourge.[8]