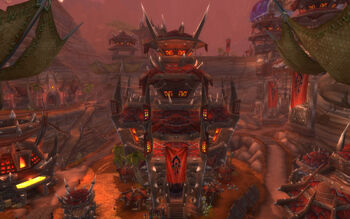 Grommash Hold in the Valley of Strength.

is an enormous fortress located in the Valley of Strength in the orc capital of Orgrimmar. It is named after the orcish hero Grommash Hellscream, it is the former seat of the Warchief of the Horde, and now it is the seat of the Horde Council.[1] Delegations from Silvermoon and the Undercity reside within, including paladin and priest trainers, as well as the trainer for archaeology.

The old Grommash Hold in the Valley of Wisdom.

The first Grommash Hold was located in the Valley of Wisdom, and was referred to as "Thrall's Fortress" by the guards. It seems to be designed as a direct upgrade of the stronghold model, being larger, built into the cliff-side, and with a distinct interior.

Thrall held court inside the hold, while outside a traveler would find a monument to the orcs' triumph over demonic influence. Mannoroth, the demon lord who cursed the bloodline of the orcs, fell in battle to Thrall and Grom Hellscream. Mannoroth's skull and armor were displayed on the trunk of an ancient tree, bearing a plaque that told of the orcs' victorious transformation and reminded readers of the mistakes of the past.

Before the invasion of Outland, Nazgrel resided here as well, but after the reopening of the Dark Portal, he moved to Thrallmar in Hellfire Peninsula.

During the war against the Lich King, and after the Wrathgate incident, many civilians gathered in front of the building while Thrall, Sylvanas Windrunner and Jaina Proudmoore discussed the events.[2]

During the Elemental Unrest, meetings of the Horde leaders gathered in the hold, once during the celebrations in honor of the Northrend campaign[3] and later, Thrall met with Garrosh Hellscream, Eitrigg, and Vol'jin where he named Garrosh the Warchief.

Following an ambush on the Sentinels in Ashenvale, Cairne Bloodhoof arrived here, accused the new Warchief and challenged him to a mak'gora.[4] The troll chieftain later left the Hold after years of residing here.

This Grommash Hold was destroyed in the Cataclysm, and was replaced by the current Hold, located in the Valley of Strength. The Mannoroth bones were moved inside of the new Hold and hung above Garrosh's throne. At the center of the hold is a massive hide rug depicting a map of Azeroth. The Horde leadership used this rug to plan their war strategies.

After the death of Deathwing the Horde leaders met here to discuss Garrosh's plan to conquer Theramore and Kalimdor.[5]

It was here that Nazgrim informed Warchief Garrosh about the naval victories against the Alliance and about the new uncharted land in the south.[6]

Garrosh Hellscream left Grommash Hold and now sits upon his new throne within the Underhold, leaving the Kor'kron Dark Shaman, to guard it in his absence while the Horde rebellion and Alliance lay siege to the city.

After dethroning Garrosh, Vol'jin became the new Warchief and took the place on the throne.

After the Battle for the Broken Shore, Vol'jin was brought hurt and poisoned. The building became closed to visitors, excepted for adventurers which High Overlord Saurfang let pass. While sitting on the throne, Vol'jin declared Sylvanas Windrunner Warchief and died right after. Following his funeral ceremony, the building was closed but opened later with Saurfang residing within as leader of the orcs.[7][8]

Horde leaders dined here after the fall of the Burning Legion.[9]

During the Battle for Lordaeron, a portal was opened here to the Undercity. After its fall, Sylvanas commanded the Horde from the hold and was known to hold several meetings within, including the private meeting with her dark rangers when she sent them after Varok Saurfang in Azeroth.

Over the course of the Fourth War, the Horde split between Sylvanas Windrunner loyalists and Varok Saurfang's revolutionaries. Sylvanas and her loyalists had secured Orgrimmar, where Sylvanas commanded them from Grommash Hold during the conflict.[10] After the revolutionaries and the Alliances secured the Gates of Orgrimmar,[11], Saurfang, recognizing Sylvanas's loyalists as his brothers and sisters in the Horde and unwilling to spill more Horde blood, challenged Sylvanas to Mak'gora, to which she accepted. The Mak'gora ended with the death of Saurfang and Sylvanas abandoning the Horde.[12]

Following these events, the Horde reunited once more and held Saurfang's funeral outside of the hold.[13]

Afterward, High Chieftain Baine Bloodhoof relocated to Grommash Hold where he listened to the petitions of Commander Dresh, Bladeguard Sonji, and First Arcanist Thalyssra.[14] At the same time, Baine was approached by Kiro of the vulpera, who asked to let his people join the Horde. The High Chieftain was forced to decline due to the Horde's allies struggles.[15] They proved their worth, and Baine apologized and realized that he was wrong to dismiss them, eventually welcoming the vulpera into the Horde.[16]

In the aftermath of N'Zoth's defeat, the Horde leadership forewent selecting a new warchief in favor of a council-style leadership.[17] It is currently unknown which, if any, members of the council will reside within Grommash Hold.

Grommash Hold was where Horde Council held their meetings. One was derailed by a failed assassination attempt on Talanji, the Zandalari queen and a key ally, which prompted the Horde leadership to empower Zekhan with aiding Talanji against the rising threat against her. Another meeting was held within the hold after the Alliance sent word that they were aware of the unrest in Zandalar, their belief that Talanji was working with Sylvanas, and that they had requested to speak with the council, another meeting was held in the city. This meeting ended with a unanimous vote for Thrall and Ji Firepaw meeting with Jaina Proudmoore and Anduin Wrynn, in the hopes that this would lead to the capture of Sylvanas.[18]

At some point, Rokhan took up residence within Grommash Hold, where he took up leadership of Orgrimmar.[19]

The council convened atop of Grommash Hold where they informed Horde champions of the return of the Scourge and the abduction of Thrall and Baine.[20] These champions were subsequently sent to unite with the Knights of the Ebon Blade and the Argent Crusade in order to combat the returning enemy.[21] Following the death of Herald Dalora, they returned to Orgrimmar to inform the council about the events that occurred in Icecrown and the dark powers that Sylvanas had allied with.[22]

The fortress in The Frozen Throne.

The keep was simple, and while well designed, it lacked the riches and statues one might see in a human palace.[23]