Not to be confused with Grommar.

There is a throne area where a tree, the one Grommash had been tied to may years ago, was moved. On the tree is the skull of a former Imperator.[1]

After Grommash Hellscream, the chieftain of the Warsong clan, formed the Iron Horde, he became its warchief, leaving his previous role as chieftain.

Shortly after its formation, the orcs attacked Highmaul and sent a message to negotiate. Imperator Mar'gok along with Ko'ragh and Vareg entered the camp and started negotiating with the Warchief. Mar'gok noticed how the camp has changed.[1]

He subsequently chose Garrosh Hellscream (who, unbeknownst to Grommash, was not only his son, but from a different timeline) to succeed him as ruler of the Warsong clan. Garrosh accepted this position and took up residence in the Warsong stronghold of Grommashar. From here he oversaw the war effort against the encroaching Alliance and Horde forces in Nagrand.

Following several Alliance and Horde victories throughout Nagrand, they eventually targeted Grommashar itself. In a long and vicious battle, Grommashar was breached, and the defenders were eventually defeated. At the end of the battle, Garrosh was confronted by Thrall of the Horde and Yrel of the Alliance. They clashed but, before long, Thrall challenged Garrosh to Mak'gora. Garrosh eagerly accepted the challenge and they proceeded to the Stones of Prophecy. There, Garrosh was defeated and killed by Thrall, who emerged victorious. The fall of Grommashar marked the end of Warsong dominance in Nagrand and was an important blow to the Iron Horde. 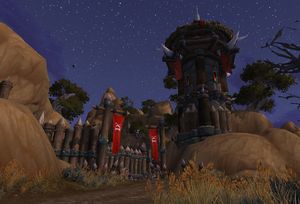 Grommashar is built into a crescent-shaped canyon. It has two entrances, one in the east and one in the west. An almost dried up river runs through the fortress, which begins in the lake surrounding Telaar. The entire base is dominated by towers, which are especially prominent near the entrances.

Grommashar may have been the encampment which Garrosh entered after traveling through time, to convince Grommash to join his cause.

In the original timeline, Grommashar was very likely destroyed when Draenor shattered and became Outland, the land where it once stood in Nagrand having crumbled into the Twisting Nether.