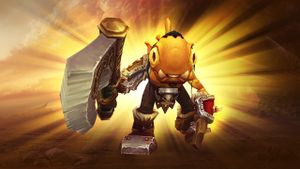 Grommloc is a Grom Hellscream-themed companion that can be obtained from the BlizzCon 2014 swag/goodie bag.[1]

Players receive Grommloc in a letter from Master Handler Sylvester:

Thank you for attending BlizzCon 2014!

As a special gift of appreciation, we would like to present you with the littlest Warlord - Grommloc!

May Grommloc lead you to new adventures across the face of Azeroth and beyond!

No matter how much he screams, never give him demon blood.

Grommloc was released to players on October 31, 2014 in advance of BlizzCon 2014, but players quickly noticed that there was no Feat of Strength for learning the companion. Senior designer Jeremy Feasel quickly tweeted out a response: "Adding in 6.1, our apologies, you will retroactively get your FoS."[2]