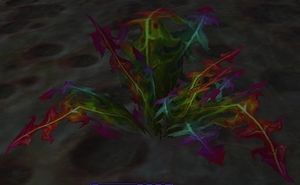 Gromsblood is an herb that can be gathered with Herbalism (250). The plant can be found in places inhabited by demons: Felwood, Blasted Lands, Desolace, Dire Maul East and in small amounts in south-eastern Ashenvale. It is also sold by Vi'el a level 60 exotic reagent vendor located in a small cave just inside Darkwhisper Gorge in Winterspring. He sells a limited supply of 5 Gromsblood which is on a timer and may take 45 minutes or longer to reappear.

Gromsblood is named after Grom Hellscream.[citation needed]  It is used in many alchemy recipes that involve strength and / or demons, and it can only be harvested in areas that have lore related to the taint of demons (which fits well with Grom's lore).