Not to be confused with Grong.

Grond was a massive elemental giant created by the titan Aggramar to defeat the Evergrowth and then maintain balance over primal Draenor.[1] Upon being slain by the Sporemound Botaan, Grond's body fell and became the region of Gorgrond,[2] while his head in Nagrand became known as the Throne of the Elements. The boulders that toppled from his body during his clash with the Sporemounds gave rise to the colossals and in turn their descendants—the various breakers, the ogres, and the orcs—while the elemental energies contained in the debris gave rise to Draenor's first physical elementals.[1]

When Aggramar came across Draenor in his travels, he was intrigued by the world, but foresaw doom for the planet if the Evergrowth was allowed to grow unchecked, as it would eventually consume everything on the world, including the elemental spirits. Once that happened, the Evergrowth would devour itself, and Draenor would be left a wasteland devoid of life. Aggramar's natural affinity for order compelled him to take action, but he did not wish to completely destroy Draenor's plant life, only to temper it. Thus, he would need to neutralize the Sporemounds, the heart of the Evergrowth's power.[1]

The titan considered destroying the Sporemounds himself, but since his power was so great it risked irreparably damaging or even shattering Draenor and because he could not stand guard over the world forever, he instead decided to create a mighty servant in his own image to uproot the Sporemounds. Aggramar swept his colossal hand over the world and wove its fire, air, earth, and water energies into a massive elemental storm. He channeled the roaring tempest into Draenor's largest mountain, sending the energies blasting through the crust and causing shockwaves of force to echo around the globe. The mountain itself groaned to life and rose up on two colossal legs. Raw elemental power crackled over a craggy hide crisscrossed by veins of molten stone. Aggramar named his creation Grond, and he would serve as the titan warrior's hand on Draenor.[1]

At his creator's command, Grond set out to conquer the Evergrowth. As the walking mountain lumbered over the world, lakes of elemental fire trailing in his footsteps, he dredged out seas, carved valleys and forged mountains to separate the Evergrowth. He then marched toward the nearest Sporemound, which towered nearly as high as a giant. Grond smashed through the Sporemound's entangling roots with ease before stabbing his jagged fingers into the creature and then tearing it from the world's surface with a single mighty heave. The other Sporemounds shivered in agony at the destruction of their kin. Mere roots would not topple Grond; instead, the Sporemounds would need to adapt.[1]

Each Sporemound drained the surrounding wilds of life essence, leaving behind only withered tracts of land. Infused with these energies, the Sporemounds arose to walk the world. There were three, each embodying a different region of the Evergrowth: Zang, whose hide was covered in swamps and mushroom thickets; Botaan, who was covered with primal forestlands; and Naanu, who wore a fleece of dense jungles. As one the Sporemounds moved against Grond, and Draenor buckled under the weight of the warring giants. Aggramar watched the battle from the skies over Draenor. Zang, Botaan and Naanu were determined to protect the Evergrowth at any cost, and through their communal sentience they moved in perfect unison against Grond, nearly overwhelming him. However, like his creator, Grond possessed a will of steel and refused to give up. As the calamitous battle raged, the tide shifted between each side. The Sporemounds were resilient, but could not hold out forever against Grond's attacks. Zang, the smallest of the Sporemounds, suffered the most and was the first to fall. Grond took hold of it and tore it in half. Its rotting body would later transform into the Zangar Sea. Grond pressed his attack against Naanu and crushed it between his hands. The creature collapsed to the ground, where its broken husk would slowly sink into the earth and become the region of Tanaan Jungle. Only Botaan remained, but Grond was weakened and scarred by the battle. Botaan sensed its opponent's weakness but would need more power to defeat the giant. It leeched the life essence from the bodies of Naanu and Zang, absorbing them and growing to a monstrous size. Still, Botaan remained cautious, evading Grond's direct assaults while entangling him in thousands of small vines that gradually burrowed into the cracks and wounds on his skin. Grond considered them a mere nuisance and ignored them until it was too late. The vines wrenched open his existing wounds and tore open new fissures across his body. Grond collapsed beneath his own weight and crumbled to pieces, the bulk of his corpse forming a mountain range now known as Gorgrond, at the edge of a region later called Nagrand.[1][2] 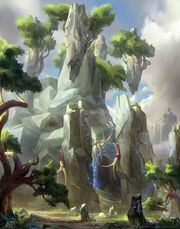 The orcish temple at the Throne of the Elements, formed from Grond's head.

During the battle between Grond and the Sporemounds, pieces of their bodies had fallen to the earth and given rise to new types of creatures. From the seeds and roots of Zang, Naanu and Botaan, many unique beings sprouted, the greatest of which were the genesaur, while from the largest boulders that had toppled from Grond, the colossals arose. Though not as mighty as Grond, their shadows still loomed large over the land. Much of the stony debris that had fallen from the giant also contained the elements of fire, air, earth and water, which coalesced into pools of power from which elemental spirits took shape for the first time in Draenor's history — something made possibly by the Sporemounds and their consumption of much of the Spirit of Life, which allowed the elemental spirits to grow in power. The elementals were initially few in number, but their population exploded after Grond's defeat, causing countless elementals to emerge around his mountainous remains, with the most powerful among them being Incineratus, Aborius, Gordawg and Kalandrios. They lamented Grond's death and vowed to dwell in his corpse's shadow forever, with their home being the remains Grond's head, which formed a small island in the middle of a tranquil lake. This place would eventually become known by mortal cultures as the Throne of the Elements.[1][3]

With the aid of power granted to them by Aggramar, the colossals eventually sacrificed themselves to destroy Botaan, killing hundreds of genesaur and destroying the communal sentience of the Evergrowth. The life energies and spores released by Botaan's destruction caused many new forms of plant life to arise, but also settled on and weakened the bodies of the magnaron — pieces of the colossals just as the colossals had been pieces of Grond. This led to the birth of the gronn, ogron, ogre and orc races. The descendants of Grond, known collectively as the breakers, would continue to battle the descendants of the Sporemounds, the primals, for millennia.[1]

When orcs of the Shadowmoon clan learned to peacefully commune with the elements at the Throne of the Elements, becoming the first orcish shaman, they transformed Grond's head into a crude temple. When the ogres of the Gorian Empire witnessed the power of the shaman first hand, they decided to take this elemental power by force. The Gorian leader, Imperator Molok, sent an army to drive away the orcs and claim the Throne of the Elements for the empire. The ogres eagerly and carelessly dissected the Throne with their arcane spellwork, ignorant to the mix of raw titan and elemental power that lingered in Grond's remains. One day, the dissonance between the ogres' magic and Grond's residual energies ignited an explosion that blew apart the temple the orcs had carved from the giant's skull and killed every Gorian sorcerer inside the structure, leaving behind only a few standing stones. This disaster threw the elements out of balance all across Draenor, but as Molok simply sent more sorcerers to continue their heedless tampering with the Throne, the orcs were driven to action and united into a single army to wage war on the ogres.[4]