The gronn are a race of immense, brutal giants native to Draenor. They are members of the Breaker faction, descendants of the magnaron and the ancient colossals and are themselves the ancestors of the ogron, ogres and orcs, the former of which worshipped their massive progenitors as gods. However, the gronn show little love for their ogre offspring, ruling over the ogre clans of Outland with an iron fist.

Adolescent gronn are known as gronnlings.[1]

As the stone giant Grond battled the Sporemounds, pieces of the battling leviathans fell to the earth and gave rise to new types of creatures. From Grond came the colossals and elementals, while from the Sporemounds many unique beings arose, the genesaur greatest among them. After Grond's death at the hands of the Sporemound Botaan, the colossals continued their war against the Evergrowth and Botaan's minions for thousands of years, but over the millennia these battles took their toll on the stone giants. Just as the colossals had risen from pieces of Grond, new creatures called the magnaron emerged from the remains of fallen colossals. After the colossals sacrificed themselves to kill Botaan in a massive explosion, spores from the plant creature's body, teeming with the Spirit of Life, drifted back to Draenor's surface and clung to the hides of the magnaron, weakening their bodies. Some of the magnaron devolved into half-flesh, half-stone giants known as gronn. Due to the lingering effect of the spores, a small number of gronn continued to degenerate into the ogron and in turn the ogres and finally the orcs.[2]

The magnaron, gronn, and ogron were known collectively as the Breakers, and though different in many ways, their common ancestry united them against the plant-like Primals, the descendants of the Sporemounds. For many long ages, the two factions engaged in sporadic battles with one another, neither side ever managing to destroy the other.[2] 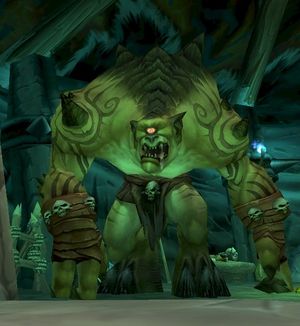 By the time that the arakkoan Apexis empire fell, the children of stone had grown in number and spread across the land. Small populations of gronn roamed the world. They lived in solitude, for no place on Draenor could sustain the hunting needs for multiple gronn at once. When they met, they often fought to the death over territory. The ogron, who feared their gronn ancestors and viewed them as gods, frequently offered up the sick, weak and elderly members of conquered ogre clans as living sacrifices to appease the gronn and keep them from attacking ogron territories.[3]

One day, a group of arakkoa led by Yonzi sought to claim a ruined Apexis settlement in Talador, a place now occupied by ogron. As they found it impossible to barter with the creatures, the arakkoa instead began teaching the ogron's ogre slaves the arts of arcane magic in the hopes that they would rebel against their masters. One of the first to master this new power was named Gog. He strode forth, empowered, but not to fight the ogron: instead, he targeted the gronn, whom all ogres revered and feared as deities. Though stunned, the arakkoa could not argue with the results. Gog did not only kill one gronn with his magic but several. By his fifth, stories of his deeds were known to all captive ogres on Draenor, erasing their fear of both gronn and ogron and leading to a bloody war in which nearly every ogron tribe fell to their ogre captives. Thus, the Gorian Empire was born.[3]

Thousands of years later, the Orcish Horde marched across Draenor. Warchief Blackhand tasked the orcish Frostwolf, Thunderlord and Whiteclaw clans with wiping out Draenor's gronn, ogron, and magnaron, as well as the ogres that had refused to join the Horde. The Frostwolves and Whiteclaws saw no honor in hunting the giants down and held most of their warriors back, but Chieftain Fenris and his Thunderlords did not shy away from the task and reveled in the slaughter of their ancient enemies.[4]

One of the few gronn to escape the onslaught was named Gruul, who far surpassed the rest of his kind in brute strength and cunning. He lorded over a small number of ogres and gronn in Gorgrond, and from his remote lair in the mountains he fended off multiple Thunderlord assaults. Casualties grew so great that Fenris eventually abandoned the attacks.[4] 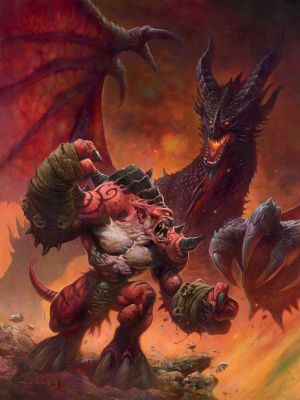 Years later, the black Dragon Aspect Deathwing and his minions swooped down on Gorgrond in search of a safe place to store his eggs. However, Gorgrond was still home to Gruul and the gronn who had survived Draenor's slow decay. The giants were highly territorial, but the calamities that had befallen Draenor caused them to join forces in order to survive. Gruul and his followers had no intention of allowing intruders to conquer their home and ferociously fought back against the dragons. Deathwing saw them as little more than pests and ignored them while the rest of his dragonflight fought the giants, but while the Aspect was distracted, the Sons of Lothar arrived in Gorgrond in search of the Skull of Gul'dan. The Alliance forces were deeply unsettled by the battles between the gronn and the dragons, for Gruul and his minions had taken to impaling their enemies' corpses on spikes. The gronn nearly attacked the Sons of Lothar, but Khadgar and Turalyon convinced them that the Alliance was also the enemy of the black dragonflight and managed to strike a bargain with Gruul: he would give them safe passage through Gorgrond, and they would help him defeat Deathwing. The gronn and the Alliance prepared an ambush at the largest cache of Deathwing's eggs, and the Sons of Lothar destroyed as many of the eggs as they could. When Deathwing and his followers appeared, Gruul scaled Gorgrond's mountains to battle the Dragon Aspect with his bare fists. Meanwhile, Khadgar used his magic to rip apart the metal plates bolted to the Aspect's spine, causing him so much pain that he dropped the Skull of Gul'dan and was forced to immediately flee back to the Dark Portal. As the gronn and the dragons continued to fight each other, Khadgar and the Sons of Lothar collected the Skull of Gul'dan and hastily retreated from Gorgrond, fearing that Gruul would turn on them after the dragons were defeated. When the fighting in Gorgrond was done, Gruul reasserted his dominion over the land, and his battle with Deathwing would cause him to be known as the Dragonkiller.[5]

Today Gruul the Dragonkiller is worshipped as a deity by the ogres of Blade's Edge Mountains, the twisted remnants of Gorgrond after Draenor was shattered into Outland. His powerful sons ravage both the spires of their home and the plains of Nagrand. Gruul's unparalleled strength and experience in battle would pose a serious threat if he ever chose to attack Horde or Alliance forces in Outland.[6]

Some gronn have since been brought to Azeroth. Skullcrusher the Mountain, the "Chosen of Cho'gall" serves the Twilight's Hammer in the Twilight Highlands, while Enslaved Gronn Brutes serve the Twilight forces in Grim Batol. At some point, the then-Warchief of the Horde Garrosh Hellscream captured a Nagrand gronn named Oggax and brought him to the Brawl'gar Arena in order to test the fighting prowess of the recently arrived Ji Firepaw and an adventurer of the Huojin Pandaren.

On an alternate Draenor, the gronn have largely been enslaved by the Iron Horde. Garrosh Hellscream knew that the surest path to breaking the gronn lay in subjugating their great father, Gruul, who has been put to haul pallets of fuel to the furnace in Blackrock Foundry, one of his hands being replaced with a hook as a mockery of the Shattered Hand clan's warrior traditions.[7] Grommash, Warchief of the Iron Horde, found a way to weaponize the gronn, strapping great cannons to their backs using harnesses engineered in such a way that the gronn hardly notices the weight and can fire the cannons at will.[8][9] In Frostfire Ridge, the Thunderlord orcs began capturing the gronn of Daggermaw Ravine for the Iron Horde,[10] while in Nagrand, ogres of the Gorian Empire began enslaving gronn with pernicious magic, almost doubling the size of their army.[11]

A number of "wild" gronn still remain in the wastes of Gorgrond, where they fight alongside the rest of the Breakers in their eternal war with the Primals. In Gorgrond, the Burning Blade clan resurrected several ancient gronn alongside Gorgorek, a former magnaron alpha.[12] 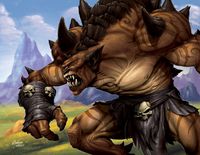 Gronn are half-flesh, half-stone giants. During the early days of Draenor, these massive predators stalked the edges of the wilds, terrorizing lesser life-forms and devouring anything they could find. Though only moderately intelligent, gronn are exceptional hunters, using the jagged spikes protruding from their skin as weapons to kill their prey while their rocky plates function as armor to protect them from other dangerous creatures.[2] Gronn are normally highly territorial and are not prone to living in close proximity with one another, though the gronn who served under Gruul joined forces in order to survive as a result of the calamities that befell Draenor.[5]

Described as monstrous, cyclopean and as "terror incarnate", the gronn show little love for their ogre offspring, lording over the ogre clans with an iron fist. Though they are not famed for their intelligence, it is undeniable that the gronn wield devastating power. The ogre lords are the only ogres known to retain some of the physical traits of their gronn progenitors, such as the bony, calcified protrusions on their head and back, as well as a portion of the gronn's immense size and strength.[13]

Gronn blood is black in color.[14]