Grounding Totem is a Restoration shaman honor talent, available at rank 43. It applies a buff to all party members within range which effectively makes one party member immune to the next spell cast on them, apart from AoE spells. This spell will affect the totem instead, destroying it.

The Grounding Totem is very useful for initially shutting down mages in PvP. Simply

[Wind Shear] to break their first cast, drop the Grounding Totem to absorb their second cast, and

[Wind Shear] should be ready again by the time the mage can cast again.

For a discussion of know when to use the

The Grounding Totem is noteworthy when trying to escape a class that has spell based snares, such as a mage's

[Frostbolt] so the shaman doesn't get slowed down when fleeing. Grounding Totems are exceptionally well at absorbing mana drains as they will not be harmed from it Mana Drain but still redirects the spell.

It is possible, though rare, for a Grounding Totem to be able to absorb more than one direct damage spell. This typically can happen if the two spells finish casting before the totem is hit by the initial spell. Being as how spells with a travel time (such as

[Frostbolt]) do not damage the target until the projectile hits, the totem will redirect any of these types of spells until it takes damage and summarily gets destroyed (after which the Grounding Totem buff will be removed).

Grounding Totems do not tend to work against boss abilities that mind control players (such as those found with Harbinger Skyriss or Baroness Anastari). However, they do work against monster initiated mind controls (such as those found with Spectral Retainer). The same is also true for fear effects, with the Rift Keeper in Black Morass having a fear that can be grounded. Direct damage effects and curses are generally groundable, even if from a boss. 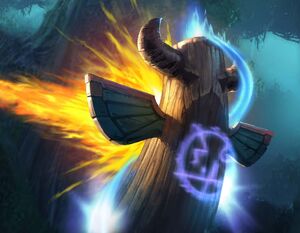