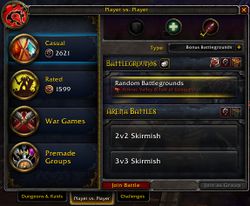 The Player vs. Player tab

The Group Finder is an interface that facilitates the creation of groups for various purposes. It can be accessed through a button on the micro menu at the bottom of the user interface. 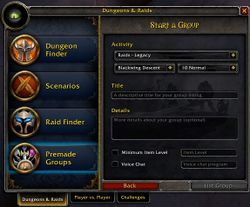 Starting a Premade Group in the Dungeons & Raids tab

The Dungeons & Raids tab houses panes to create groups for dungeons, raids, and the option to create premade groups for any PvE activity.

The Challenges interface allowed players to view guild and realm best times for the current Challenge Mode dungeons, as well as open a browser to view the full leaderboards. Medal times are are also listed.

The Player vs. Player interface allows players to create groups for most types of PvP activities, including battlegrounds, arena, rated battlegrounds, premade groups and War Games.

As part of our ongoing efforts to crack down on in-game advertising, we’ll be implementing some policy changes with how we handle moderation for advertisements made through the in-game Group Finder, and wanted to give you a heads up before these policies are put into place.

Beginning Monday, July 2nd, we will no longer allow any advertisements in the Group Finder for in-game services such as carries or boosts, including those being offered in exchange for in-game gold. The Group Finder is intended for -- as the name suggests -- finding groups, and these advertisements make it difficult to find active groups that are currently being formed. Additionally, these are often used as a cover for real-money sales, particularly given that in-game gold cannot be transferred cross-realm.

Note that this does not change our policy on selling things such as raid carries for in-game gold. Those are still allowed, but should be advertised through realm-specific methods such as trade chat.

We'll be adding an "advertisement" option to the Group Finder’s right-click reporting function with Patch 8.0, but in the meantime, they can be reported using the "spam" option. Thank you for your understanding, and for helping us keep the Group Finder clear of unwanted advertisements.