Grove of the Ancients

The Grove of the Ancients is a sacred ruin of an old night elven temple, where Onu, an Ancient of Lore, resides together with a pair of merchants and a sleeping druid. The grove lies in the southeastern part of Darkshore, nestled near the mountains, and is built around the surging Wildbend River. The Circle of Ancients meets here. 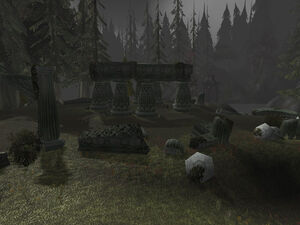 Prior to the Cataclysm.

Since the Cataclysm, the Grove of the Ancients has been transformed into a beautiful looking grove made of green and purple ancient protectors, nestled close together reminiscent of a single, enclosed, structure. The original structure still exists, though badly damaged. In addition to Onu, the Grove now has a major quest hub complete with a flight master.

The Grove was shielded from most of the devastation caused by the Cataclysm, due in large part to the power of the ancient guardians residing therein. Protecting the grove required an enormous amount of energy, though, and as a result, most of the guardians have gone into a sort of slumber. Adventurers will have to figure out a way to wake them and bring them into the fight to ensure the survival of Darkshore.[1]

During the War of the Thorns, the Horde invaded the Grove and Sylvanas attacked Malfurion at the entrance.[2] They would later build bestiaries near the Grove. The Alliance champions set them ablaze, encountering Kildar.[3]

In the Battle for Darkshore, Onu was still present at the Grove and was aided by night elf forces.